The Postal Service stopped sorting mail aboard trains in 1977, but one Railway Post Office (RPO) made an encore run this month.

To commemorate the final run of the last RPO, the Minnesota Transportation Museum transported mail in a train car that once served as a Railway Post Office.

Northern Pacific No. 1102 was built in 1914, and during its heyday transported postal employees and the U.S. Mail. 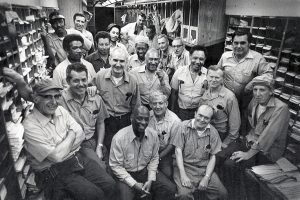 The car returned to its former postal glory May 6.

“Railroad systems helped shaped communities, and we want to show how these communities remain interconnected,” said Andrew Tighe, who handles transportation projects for the museum and came up with the idea to showcase the RPO.

Northern Pacific No. 1102 was displayed at the St. Paul Union Depot as part of a National Train Day celebration before being loaded with mail and beginning its journey to Osceola, WI.

After the mail train arrived at its destination, postal employees transported the mail to the Osceola Post Office.

In addition to helping the museum raise funds, Tighe wanted the re-enactment to offer a sense of nostalgia.

“We live in an era of where everything is immediate,” he said. “We want to bring back the anticipation of waiting to receive mail.”