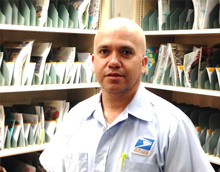 San Francisco Letter Carrier Richard Cairo was delivering mail when he noticed several irregularities in the normal schedule of an elderly customer. Throughout the day, he noticed the mail had not been collected and the customer’s garbage cans were still in front of his house.

When Cairo found out from a neighbor that the man also had not attended his daily exercise activity, he decided to call the police.

After a brief investigation, one of the police officers who responded to Cairo’s call for help heard a faint cry for help coming from inside the house. The police officers entered the house and found the 92-year-old resident lying on the kitchen floor and in need of medical attention.

After a brief hospital stay, the elderly man has recovered, thanks to Cairo’s help.