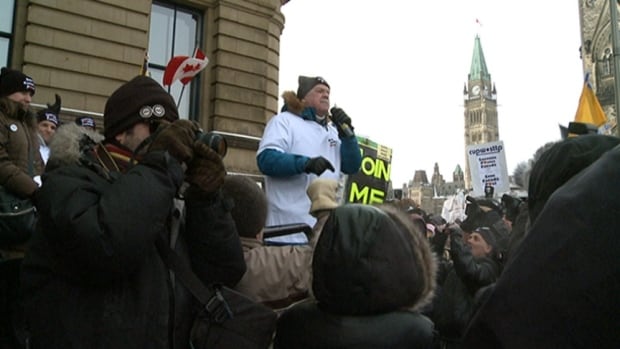 OTTAWA, Jan. 26, 2014 /CNW/ – Thousands of postal workers and supporters rallied in Ottawa on Sunday to send a message to Canada Post and the Harper federal government about their plan to end door-to-door mail delivery and hike postage rates.

“The Conservatives are wrong to think that people are going to accept these cuts,” Gayle Bossenberry of the Canadian Union of Postal Workers said in front of a cheering crowd at the Prime Minister’s office. “Stephen Harper, axe this plan and consult with the public!”

Canada Post took most Canadians by surprise with its announcement of December 11th that it would replace all door-to-door delivery with community mailboxes and further outraged the public when its President Deepak Chopra suggested that seniors wanted the exercise. Since December, municipalities, small business owners, seniors’ groups and disability advocates have been taking up the issue across the country. So far, Vancouver, Victoria and Medicine Hat are officially opposing the cuts to door-to-door delivery. Other municipalities are expected to follow.

Speakers at Sunday’s demonstration included seniors, disability activists and politicians as well as representatives from local, regional and national labour organizations. They were joined by more than 2,000 postal workers and members of the public from Ottawa, Toronto, Montreal, Quebec and Southern Ontario.

While the rally in Ottawa was the largest, it was not the only sign of popular opposition to the Canada Post plan, which is backed by the Conservative government. Rallies, town halls, forums, petitions and other activities are happening across the country. Many people and businesses are hanging signs in their windows and on their mailboxes that say “Save Canada Post.”

The union is urging people to contact their Members of Parliament. A sample letter can be found at www.savecanadapost.ca.