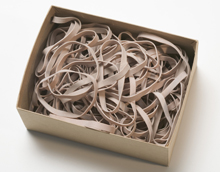 Each year, the Postal Service issues more than 1.8 million pounds of rubber bands to use in field offices.

These rubber bands are used by letter carriers and clerks across the nation, typically for bundling mail. Employees reuse many of them in efforts to recycle and reduce reordering.

Rubber bands were first used by clerks in the registry divisions of large Post Offices on a limited basis as early as 1907. They didn’t become standard until approximately 1967 when letter carriers began using them in lieu of twine to bundle mail. Postmaster General Lawrence O’Brien announced the adoption of rubber bands for bundling mail in July 1966 —but supplies were limited and it took more than a year to implement the change.

An article in the Boston Globe published in September of 1967 claimed that “the change will make it [USPS] the world’s biggest user of rubber bands. It will eventually use about as many bands as are now produced for all industrial purposes in this country.”