OTTAWA – Canada Post has been a money-maker for most of the past two decades and continues its winning streak, netting almost 100 million (99 million) in 2015.

“Thanks to record parcel volumes and the hard work of postal workers across the country, Canada Post has once again reported healthy profits. We can now take a real look at the options on the table without having to worry about a manufactured crisis,” said Mike Palecek, national president of the Canadian Union of Postal Workers.

“They would have made millions more, had they not tried to push their so-called “community mailboxes” on us,” added Palecek.

The union points out that its pension plan is also healthy on a going-concern basis, with a $1.2 billion surplus.

While CUPW has no argument with the reality of fewer letters being sent, it notes that the Crown Corporation also tends to downplay its booming parcel sector and has refused to explore other options for making money. Part of the mandate of the new Task Force is to explore these options, including postal banking.

“We’re happy that we’re finally going to have an opportunity to talk about expanding services and reinvesting some of Canada Post’s profits in ways that benefit all of us.” 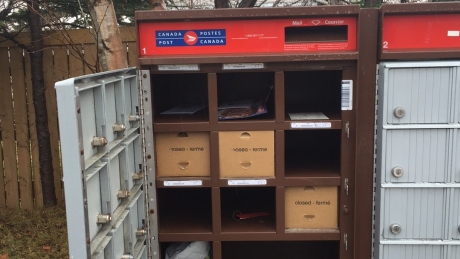 OTTAWA (Ont.) – Canada Post is temporarily suspending future deployment of the program to convert door-to-door mail delivery to community mailboxes. We will work collaboratively with the Government of Canada to determine the best path forward given the ongoing challenges faced by the Canadian postal system.

Efforts are now underway to place the comprehensive program on hold in an orderly fashion. This involves roughly 460,000 addresses across the country which are currently in the process to be converted to community mailboxes.

As a result, all conversions planned for November and December 2015 and those announced for 2016 will be placed on hold. Customers impacted by this decision will receive a letter within the next few weeks advising them of the status of their mail delivery service.

In neighbourhoods where the 10-month internal and community conversion process is complete, customers will collect mail and parcels at their community mailbox. This includes customers set to begin receiving their mail and parcels in their boxes in October. We remain focused on maintaining reliable postal service to all Canadians without disruption.

Yesterday’s election in Canada may mean the end for Canada Post’s plans to convert five million addresses from door-to-door delivery to cluster boxes. 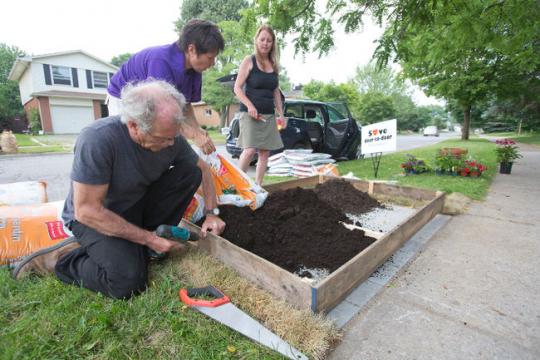 After a decade in power, the Conservatives were routed in a landslide by Justin Trudeau and the Liberal Party.  The Liberals had previously vowed to end the conversions and to conduct a thorough review of Canada Post.  On their website, the Liberals say this:

“We will stop the Harper Conservatives’ plan to end door-to-door mail delivery in Canada. We will begin a new review of Canada Post to ensure that the Crown Corporation is fulfilling its public mandate to provide high-quality service at a reasonable cost to Canadians — urban, suburban, and rural.  We disagree strongly with the Conservative decision to ask Canadians to pay more for a reduced quality of service.”

A Vancouver area man recently found an attempted delivery notice in his mailbox that gave an interesting reason for the failed delivery:

Ok, fair enough @canadapostcorp that’s a decent reason to not drop the package off at my door. pic.twitter.com/ykAldpWpEP

@canadapostcorp how come? The service was great – just thought it was funny.

M Fane on Twitter: "Ok, fair enough @canadapostcorp that’s a decent reason to not drop the package off at my door. http://t.co/ykAldpWpEP".

Sweeping cuts may be ahead for Canada Post as the Crown corporation faces a $327 million operating loss, CTV News has learned.

In order to stay afloat, Canada Post is considering:

OTTAWA – The Canadian Union of Postal Workers has scored a significant victory in its fight against the Harper government’s treatment of postal workers.

In a decision handed down October 20th in the Federal Court, Judge Luc Martineau ordered a stay of proceedings relating to the Harper government’s back-to-work legislation (Bill C-6) against thousands of locked-out postal workers in June. The arbitration will now stop until the union’s challenge of the government’s hand-picked arbitrator can be heard in January 2012.

“This decision shows that the union is on the right track. We are questioning the process by which this government has forced its will on postal workers,” said Denis Lemelin, CUPW National President and chief negotiator.

Members of CUPW’s urban unit went on rotating strike in June and were subsequently locked out by Canada Post, then legislated back to work. The union has also launched a separate constitutional challenge against the back-to-work legislation itself, which directs the arbitrator to pick one side only without any possibility of compromise.

The Martineau decision bolsters the union’s objection to Minister of Labour Lisa Raitt’s appointment of Anthony Arthur Coulter Osborne – a unilingual judge without any previous experience in labour relations – to preside over the arbitration. The merits of the union’s case will be argued in January.

Normally, arbitrators are agreed upon by the parties, rather than being imposed by the government. Observers have noted the importance of CUPW’s challenges for the future of labour relations in Canada.

Ottawa (ON) â€“ The Canada Post Group* today reported that it experienced a continued deterioration in its core Canada Post segment in 2010.

In the Canada Post annual report, which was tabled with the Clerk of the House of Commons today, the company disclosed that earnings before income taxes in the Canada Post segment in 2010 were $233 million, a 27% decrease from 2009. Volume in the companyâ€™s flagship domestic Lettermail business decreased by 4.5% from 2009. That marked the fourth consecutive year-over-year decrease in domestic Lettermail volumes and fifth consecutive year of decrease in volumes per address in Canada. Total volumes in the Canada Post segment (comprised of the Transaction Mail, Parcels and Direct Marketing lines of business) decreased by 1.8% from 2009. Revenue from Operations for The Canada Post Group totalled $7.5 billion.

Driven by a non-cash income tax entry of $192 million, The Canada Post Group* recorded consolidated net income of $439 million in 2010.

Canada Post claimed its mail volumes dropped significantly during the Canadian Union of Postal Workersâ€™ rotating strikes. That was the excuse it gave for shutting down delivery and imposing a nationwide lockout. But now piles of backlogged mail are awaiting delivery.

The Canadian Postal Service Charter sets out government expectations for delivery standards. According to those standards, Canada Post must deliver lettermail within specific timelines. However, letter carriers are not being allowed to meet delivery standards for all of the addresses on their routes. Postal workers are also reporting they are being forced to deliver out-of-date flyers rather than bills and cheques, setting themselves up to be blamed by an angry public. Reports are reaching CUPW from all over – large urban centres as well as smaller communities – about Canada Post managementâ€™s ongoing disruption of postal service.

The CUPW is concerned that decisions made by Canada Post senior management to first lock out and then delay delivery will be blamed on postal workers. This pattern of behaviour on the part of Canada Post management leads to the question: is Canada Post deliberately creating a crisis?

OTTAWAâ€”Backroom negotiations aimed at getting Canada Post workers back on the job produced at least two separate deals that came close to ending the political filibuster on Parliament Hill and the labour stoppage, the Star has learned.

But the deals fell through â€” including an apparent agreement between Canada Post and its workers â€” and insiders are pointing the finger at the Prime Ministerâ€™s Office as the reason.

New Democrats have accused Prime Minister Stephen Harper of taking a hard line in the Canada Post dispute to send a signal to other public sector unions as he girds for federal belt-tightening.

â€œObviously the (Prime Ministerâ€™s Office) got involved in there. I believe that Stephen Harper wanted to send a message across the country,â€ said New Democrat MP Yvon Godin.