He’s fast. He’s quick.He might be faster than any other letter carrier in town.

Dewey Reinert has a reputation for being quick on the job.”He makes sure that you get your mail on time all the time. He will even go the extra mile if you’re not home, he comes back again,” says Masse.

12 miles to be exact, that’s how far the 45 year old letter carrier walks everyday when dropping mail at 380 houses along his route.

He goes through six pairs of shoes a year, knows everyone on his route by name, and hasn’t missed a day of work in 17 years.

Portland, ME, Letter Carrier Alyson Thompson knows the customers on her route well.

When she recently discovered a customer collapsed near his home, she called 911 and stayed with the man until paramedics arrived.

The customer, who is elderly, has a soft spot for Thompson. “He calls me his girlfriend and told me that he still loves me,” she said.

Acts of kindness are part of the job, according to Thompson. 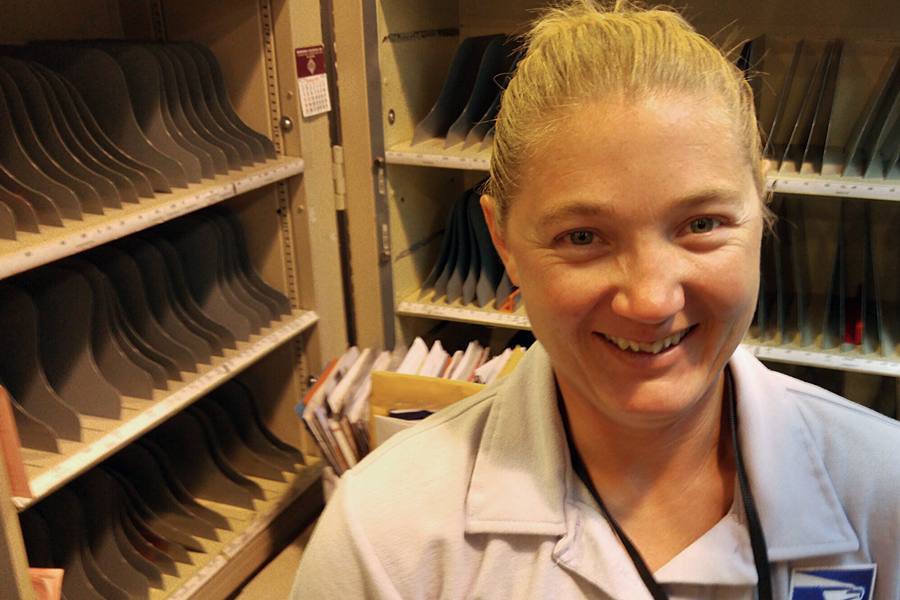 “When you deliver mail to the same houses day after day, you become an unofficial guardian,” she said.

“We’re proud to have employees like Alyson representing the Postal Service and looking after our customers’ best interests,” she said.

Meet postal worker Shirley Hall who bundles up every winter to deliver mail in NYC.

NORTH LITTLE ROCK, Ark. (KTHV) – It’s never ideal when you have to work on Christmas, but one man wanted to make the best out of his situation by dressing up as Santa while he did his job.

Dillon is a North Little Rock mailman 364 days out of the year, but once a year he’s Santa.

“The only thing I do different, I don’t come down the chimney,” said Dillon. END_OF_DOCUMENT_TOKEN_TO_BE_REPLACED 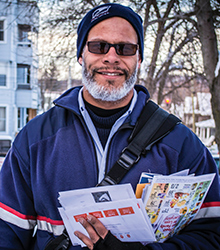 Binghamton, NY, Letter Carrier Earl Walker knew something was wrong last fall when he noticed a couple days’ worth of mail piled inside a customer’s mailbox.

Walker had previously given the man his cell phone number and told him to call if ever he needed help. The man’s vehicle was parked in the driveway and no one answered when Walker knocked on the front door, so he called police.

Emergency responders found the man lying on a floor upstairs, unable to move after several items had fallen on him.

While the man was recovering in a nursing home, Walker alerted the neighbors and encouraged them to visit him. “I feel good about connecting people that otherwise would not be connected,” Walker said.

Although the American Red Cross recently honored Walker for his good deed, he doesn’t consider himself a hero. He said he was just doing his job as a letter carrier.

“Nobody else has this type of relationship with people,” Walker said. “We’re up on porches every day. I was genuinely worried about the guy. I just did what I was compelled to do.” 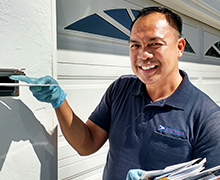 Napa, CA, Letter Carrier Eloy “EJ” Aguarin suspected something was wrong earlier this year when he noticed mail piling up inside a customer’s box.

Aguarin knocked on the man’s door and called his name but didn’t receive a response. He contacted a co-worker, Bulk Mail Clerk Beverly Lopez, who lives nearby and sent her son to check on the neighbor.

When Lopez’s son was unable to reach the man, he called 911. Emergency responders discovered the man had fallen inside his home several days earlier and was unable to get up. The man was taken to a hospital, where he recovered.

Aguarin didn’t mention his actions to anyone. Lopez told Postmaster Juliana Davison, who later honored Aguarin during a brief ceremony at the Post Office.

“It is clear that his intimate knowledge of his route, the neighborhood and the customers he serves made him aware that there was a customer in dire need,” Davison said.

Aguarin appreciated the recognition, but he said helping others comes with the territory.

“I am just doing my job. We do more than deliver the mail out here,” he said.

According to the police, a man

matching Lojko’s description approached a bank teller around 12:30 p.m. and handed her a note demanding cash. After receiving a small sum, he fled westward on foot.

The police said a postal worker making deliveries in the area saw Lojko and made “key observations” about his car, which investigators later used to identify Lojko.

“On behalf of the citizens of Concord, we offer our sincere thanks to this individual,” the police said.

Information provided by the letter carrier helped police track Lojko to his house, where he was arrested yesterday.

On March 27, 2015, the U.S. District Court in Washington, DC, issued a 52-page decision in the 20-year-old lawsuit filed by letter carrier David Noble against the NALC and 12 former national officers, including President Emeritus William H. Young and the late President Emeritus Vincent R. Sombrotto. The District Court dismissed the plaintiff’s claim that the former officers had improperly accepted a $500 monthly allowance for in-town expenses.

The in-town expenses issue was the only remaining issue involving the individual officers after a 2008 decision by the U.S. Court of Appeals for the D.C. Circuit, which rejected Noble’s claim that the NALC Executive Council had improperly authorized the union’s payment of the employee share of FICA (Social Security) taxes for national officers and regional administrative assistants.

The Court of Appeals also rejected Noble’s challenge to the payment of per diem allowances to national officers who attend the NALC’s biennial conventions; however, the Court of Appeals did not issue a final ruling on the in-town expenses dispute. Instead, it returned that matter to the District Court for further findings.

This new District Court ruling responds to the Court of Appeals’ directive.