“The Postal Service is pleased to present its new Forever stamps commemorating the birth centennial of Charles M. Schulz — the beloved creator of ‘Peanuts’ … the most popular and influential comic strip in history,” said Luke Grossmann, the Postal Service’s finance and strategy senior vice president, who served as the stamp’s dedicating official.

“This isn’t the first time the Postal Service has featured ‘Peanuts’ characters on postage stamps. Snoopy appeared as the World War I Flying Ace in 2001. And in 2015, we issued stamps to celebrate the 50th anniversary of ‘A Charlie Brown Christmas’ — which like the strip itself, was created with both adults and children in mind,” he said.

“The joy of ‘Peanuts’ — matched with the joy of sending and receiving mail — is a wonderful way to commemorate Sparky’s life and the happiness his comic strip continues to bring to the world. From holiday mail to personal collections, we hope these stamps brighten the lives of ‘Peanuts’ fans and stamp collectors alike,” said Jean Schulz, widow of Schulz, referring to the cartoonist by his nickname. 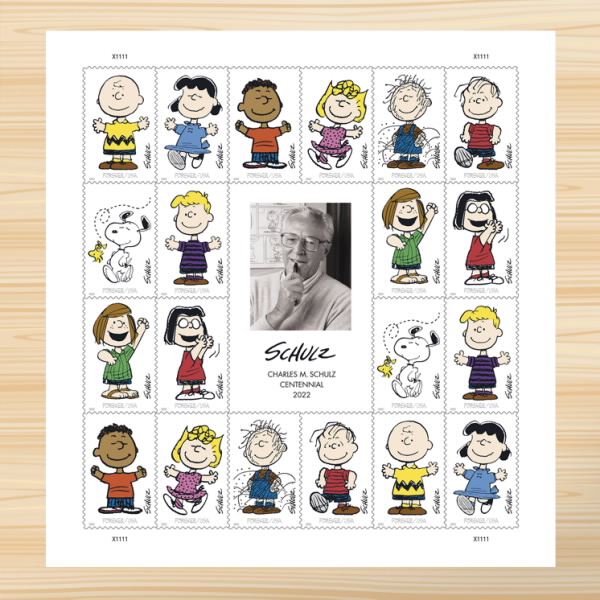 Within days of Schulz’s birth on Nov. 26, 1922, an uncle nicknamed the infant after the laughable racehorse Spark Plug, a trending character in the newspaper funny pages. The nickname “Sparky” stuck for life, and so did Schulz’s ties to the comics.

Schulz’s “Peanuts” became the most popular and successful comic strip in the history of the medium. Its characters, including Charlie Brown and Snoopy, became some of the best-known and most-beloved characters in all of American art and literature, gaining worldwide adoration through the comic strip itself, then via books, greeting cards, television, cinematic films, advertising campaigns, a Broadway musical, and countless other media and products.

Charles Monroe Schulz (1922-2000) was born in Minneapolis and grew up in neighboring St. Paul, MN. An only child, the avid reader with a knack for drawing was promoted from third grade directly to fifth. Consequently, he was younger and smaller than his classmates, forever feeling like an outsider and an observer. At age 14, Schulz’s first published drawing appeared in the popular newspaper feature “Ripley’s Believe It or Not!” Its subject, his eccentric pet dog, would later serve as his inspiration for Snoopy.

After high school, Schulz furthered his art education through a Minneapolis-based correspondence course. When World War II intervened, Schulz was drafted into the Army, serving in France and Germany, and rising to the rank of staff sergeant. After the war, he returned to the correspondence school, this time as an art instructor, where his friends included a fellow teacher named Charlie Brown. Schulz also found work lettering comic books and drawing single-panel cartoons for a local newspaper. He also sold several cartoons to the Saturday Evening Post.

“Peanuts” debuted in seven newspapers on Oct. 2, 1950. That number would eventually balloon to more than 2,600, in some 75 countries and 21 languages, with 355 million readers worldwide. Charlie Brown and Snoopy were soon joined by Schroeder, Lucy, Linus and Pigpen. Through its cast of children, the strip found humor in life’s often painful realities, such as insecurity and unrequited love.

Schulz’s characters all reflect aspects of the cartoonist’s inner life, his rich imagination and his great humanity. Charlie Brown faces constant defeat and rejection, but never loses his resolve — whether it’s to kick the football before Lucy pulls it away, to get a kite aloft or to win a single baseball game.

For five decades, Schulz steadfastly wrote, drew, inked and lettered every “Peanuts” strip — nearly 18,000 of them. On Feb. 12, 2000, he died following a battle with cancer. The final installment of “Peanuts,” a farewell from the cartoonist to his fans and his unforgettable cast of characters, appeared in newspapers the next day.

In addition to the many awards received during his lifetime, Schulz was posthumously awarded the Congressional Gold Medal, the highest civilian honor bestowed by Congress, in 2000. “Peanuts” continues through the re-publication of his unparalleled body of work.

The stamp artwork is by Schulz and Greg Breeding was the designer and art director.

During its five-decade run — Schulz created daily strips from 1950 to 2000 — “Peanuts,” featured Charlie Brown and his beagle Snoopy. Eleven members of its beloved gang, all in a celebratory mood, adorn 10 stamp designs on a pane of 20.

The six stamps on the first row feature Charlie Brown in his familiar zig-zag-stripe shirt. Long-suffering, but never truly defeated, he is the center of the cast and largely reflects Schulz’s own insecurities and resilience. Second, the headstrong Lucy Van Pelt, often the antagonist, is all smiles here in her blue dress. Third is Franklin, introduced to the strip in 1968, triumphant in a red tee shirt.

Fourth on the first row of stamps is Sally, Charlie Brown’s little sister, shown in her pink polka-dotted dress. Sally joined the strip as an infant in 1959. Pigpen, charming and self-assured, is seen on the fifth stamp in his perpetual cloud of dust, a layer of soil, and blue overalls. Sixth is Linus, Lucy’s sensitive, intelligent, and capable younger brother. He wears his typical red-and-black-striped shirt.

The second row’s four stamps begin with Snoopy, whose many alter-egos demonstrate Schulz’s own fanciful imagination. On this stamp, his bird companion, Woodstock, flutters about as Snoopy does his celebratory dance. Second is Schroeder, a prodigy often seen leaning obsessively over his piano — much as Schulz leaned tirelessly over his drawing board. Schroeder is shown here in his purple-and-black-striped shirt.

Peppermint Patty, seen third on the second row, is casual in sandals and her vertically-striped green shirt. Athletic and definitely not academically minded, her baseball team routinely defeats the hapless team headed by “Chuck,” as she calls Charlie Brown. Peppermint Patty’s loyal friend Marcie appears next on the row’s final stamp. Marcie’s no-nonsense outlook contrasts with Peppermint Patty’s; together they make a great team.

A 1987 photograph of the cartoonist, taken by Douglas Kirkland, appears in the center of the pane. The portrait is framed by the characters Schulz brought to life.