MEMPHIS, TN — The U.S. Postal Service celebrated the beauty and majestic wonder of the Mighty Mississippi River — America’s quintessential waterway — during a first-day-of-issue stamp ceremony at the Beale Street Landing in Memphis.

“In addition to its many recreational and natural attributes, the Mississippi is also the backbone of the U.S. economy — serving as a riparian superhighway, transporting more than 175 million tons of freight annually,” said Gary Barksdale, the Postal Service’s chief postal inspector, who served as the dedicating official. “Today, we continue the Postal Service’s tradition of celebrating our nation’s wonderful heritage with the dedication of 10 truly special Forever stamps honoring the Mighty Mississippi.” 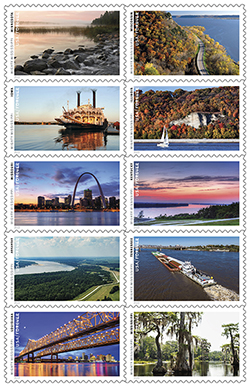 “Travelers have been captivated by the Mississippi River — romanticizing the steamboats transporting them from Minnesota to Louisiana — throughout history,” said Waggoner. “Our flagship American Queen is an iconic symbol of those mighty paddle-wheelers, and we are honored to have her grace the collection.”

The Mighty Mississippi Forever stamps are being sold in panes of 10. News of the stamps is being shared with the hashtag #MightyMississippiStamps.

The portfolio of 10 exquisite photographic stamps each represent a state along the course of the river. With five rows of two stamps each, the pane’s arrangement corresponds to the states’ north-south and west-east sequence. Art Director Ethel Kessler designed the pane using existing photographs.

Minnesota’s stamp shows the Mississippi’s source waters of Lake Itasca, as shown in a photo taken by Dana Holm. Wisconsin is represented by Jay Olson-Goude’s photo showing an autumn view of the Great River Road.

The Iowa stamp shows David Sebben’s photo of the steamboat American Queen near the city of Bettendorf. In Illinois, a sailboat passes limestone bluffs adorned with fall foliage, as depicted by Walter Blackledge.

Missouri is represented by Evan Spiler’s photo of the St. Louis skyline at sundown, punctuated by the Gateway Arch. Kentucky is seen in the city of Wickliffe, just downriver from where the Ohio River spills in, as captured in a photo by Larry Braun.

Louisiana is represented by Sean Pavone’s photo of the New Orleans skyline and the twin-span Crescent City Connection bridges. In the state of Mississippi, within the wilds of a delta bayou, photographer Ron Levine captured cypress trees that seem to drip with Spanish moss.

Background on the Mississippi River

The Mississippi is at the core of the nation’s heritage, and is often referred to as America’s backbone, its heart and its soul. From Lake Itasca’s trickling overspill in Minnesota, the Mississippi flows and grows for 2,300 miles.

The Mississippi streams through varied topography in Wisconsin’s Driftless Area, past Iowa’s millennium-old effigy mounds and by the remains of Cahokia, the nation’s largest pre-Columbian city, in Illinois.

The Ohio River, flowing in along Kentucky’s northern border, doubles the Mississippi’s volume. The Lower Mississippi is a riparian superhighway. Massive engineering works — channels, locks, dams and levees — help accommodate barge tows more than 1,000 feet long, common along the Arkansas-Tennessee boundary and beyond.

Abundant bayous in Mississippi and Louisiana split the river into a bird-foot-shaped delta. The New Orleans area hosts the river’s largest port.

At the point where the Mississippi reaches the Gulf of Mexico, the trickle that started in Lake Itasca has intermingled with waters from 31 states.

Postal Products
Customers may purchase stamps and other philatelic products through the Postal Store at usps.com/shopstamps, by calling 844-737-7826, by mail through USA Philatelic, or at Post Office locations nationwide.

Forever stamps will always be equal in value to the current First-Class Mail 1‑ounce price.

A video of the ceremony will be available on facebook.com/usps. Information for ordering first-day-of-issue postmarks and covers is at usps.com/shop.