WASHINGTON — The U.S. Postal Service has announced several additions to the 2022 stamp program first announced last fall. All stamp designs are preliminary and subject to change. Additional details, including issue dates and locations, will be announced later. 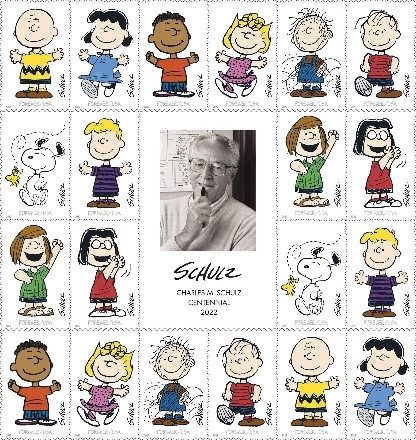 Charles M. Schulz
New stamps salute the centennial of cartoonist Charles M. Schulz (1922–2000) whose “Peanuts” characters are some of the best known and most beloved in all of American culture. For five decades, Schulz alone wrote and drew nearly 18,000 strips, the last one published the day after he died. Each character reflects Schulz’s rich imagination and great humanity. His resonant stories found humor in life’s painful realities including rejection, insecurity and unrequited love.

In a celebratory mode, characters from “Peanuts” adorn 10 designs on this pane of 20 stamps and form a frame around a 1987 photograph of Schulz.

The image on the stamp is an artist’s digitally created depiction of the telescope against a dazzling starscape. The selvage photograph of a star and distant space was taken by Webb early in its mission, brilliantly confirming the perfect alignment of the telescope’s 18 mirror segments.

Snowy Beauty
These stamps celebrate the warmth and cheer that flowers and berries bring to our natural landscapes, even after a surprise snow.

The Snowy Beauty stamps will be released in Guilford, IN, without a first-day-of-issue ceremony this fall.

Hanukkah
The Postal Service continues its tradition of celebrating the joyous Jewish holiday of Hanukkah with a stamp design that features an original wall-hanging.

The fiber art was hand-dyed, appliquéd and quilted to form a colorful abstract image of a hanukiah, the nine-branch candelabra used only at Hanukkah.

Jeanette Kuvin Oren was the stamp designer and artist. Ethel Kessler was the art director.

Virgin and Child
This Christmas stamp features Virgin and Child, an oil-on-panel painting from the first half of the 16th century by a Florentine artist known as the Master of the Scandicci Lamentation.

Depicting the tenderness of a mother and child, interpretations of the Virgin Mary with the Christ Child take innumerable forms in the Christian art of the Italian Renaissance. Imbued with a sense of dignity and grace, this stamp offers a traditional touch for cards and letters in a season of celebration, reflection and family. This painting is in the collection of the Museum of Fine Arts, Boston.

Kwanzaa
This year the Postal Service issues its ninth stamp in celebration of Kwanzaa, a holiday with origins in ancient and modern first-harvest festivities from across the African continent. Kwanzaa incorporates and reimagines many communal traditions as a contemporary celebration and reaffirmation of African American culture.

The stamp design depicts a girl and a boy dressed in robes akin to spiritual garments, with a kinara (candleholder) and seven lit candles (mishumaa saba) in front of them. The kinara is the focal point around which friends and family gather and place meaningful objects.

Like many beloved Christmas traditions—including Santa Claus himself—elves did not become a well-established part of the holidays in America until the 19th century. In the 20th century, as elves became firmly rooted in American Christmas lore, they eventually took center stage in beloved holiday television specials, films and books.

Don Clark was the artist and stamp designer. Antonio Alcalá was the art director.

Postal Products
Customers may purchase stamps and other philatelic products through the Postal Store at usps.com/shopstamps, by calling 844-737-7826, by mail through USA Philatelic or at Post Office locations nationwide.

Forever stamps will always be equal in value to the current First-Class Mail 1‑ounce price.