ALPINE, WY — With spring approaching, the U.S. Postal Service has issued new Forever stamps featuring mountain flora. These flowers will soon be springing up in a riot of beautiful blooms across their respective habitats, while the four new stamps will appear in Post Offices nationwide and online at usps.com/stamps. The stamps were issued in Alpine, WY. 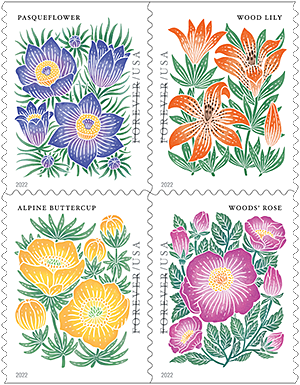 An important part of the natural world, wildflower habitats support species such as butterflies, bees, birds and foraging mammals. Wildflowers grow in varied environments, including bogs and swamps, forests and woodlands, alpine meadows, mountain slopes, coastal bluffs and even deserts. Some wildflowers are widely distributed across the United States, while others are specific to just a small area.

Pasqueflower (Anemone patens) is distributed in the Western and central states. It grows on mountain slopes, in meadows and on prairie grasslands. One of the earliest blooming wildflowers, the common name pasque refers to Easter or Passover, when the flowers first begin to appear.

Woods’ rose (Rosa woodsii) is native to parts of the Western and Central United States. It blooms in late spring through July on stony slopes and in mountain forests, among other habitats. This fast-growing, long-lived perennial plant forms dense thickets of thorny shrubs that can reach 10 feet in height.

Wood lily (Lilium philadelphicum) is a red or red-orange, summer-blooming flower. The native plant grows in many habitats, including mountain meadows in Western states and the grassland prairies of the Great Plains. It is rarer in the Eastern part of the country. The bulbs were once gathered for food by Native Americans.

Alpine buttercup (Ranunculus adoneus) is one of more than 330 species of the Ranunculaceae family that bloom in the United States. The flowers appear in the spring in mountain meadows near the edge of melting snows and continue to bloom into summer. The native plant is found in several Western states.

Wildflowers, like many garden flowers, can have several common names; they can even share common names with unrelated plants. Botanical names are also frequently in flux as scientists learn more about the characteristics of each plant and reclassify them. As of the issue date of these stamps, the common and scientific names are accurate.

The Mountain Flora stamps are being issued in booklets of 20 and coils of 3,000 and 10,000 stamps. These Forever stamps will always be equal to the current First-Class Mail 1-ounce price.