News of the release is being shared with the hashtag #Sesame50.

“For the past 50 years, the influential and beloved Sesame Street has won the hearts of kids, parents, and critics alike,” said Luke Grossmann, USPS vice president of finance and planning, who served as the dedicating official at the event. “The Postal Service is delighted to honor the show, its creators and these lovable characters with this colorful pane of Sesame Street Forever stamps.”

“Our mission is to help kids everywhere grow smarter, stronger and kinder, and we’re excited that our furry and feathered Sesame Street friends will be smiling from the corners of cards and letters forever — which is how long we hope Sesame Street will continue to bring learning and laughter to children and families around the world,” said Steve Youngwood, President of Media & Education and Chief Operating Officer, Sesame Workshop.

Background
Sesame Street first aired Nov. 10, 1969, providing educational programming and entertainment unlike any other children’s television show. Initially broadcast on more than 180 stations, the program introduced audiences to human characters, often children themselves, who interacted with Jim Henson’s Muppets. Characters like Maria and Gordon, Mr. Hooper, Big Bird, Oscar the Grouch, Bert and Ernie were soon watched by viewers worldwide. Parodies and spoofs — of fairy tales, musicals and pop culture, for example — quickly became fundamental components of the show. Backed by research and testing, the creative team for Sesame Street has always aimed to develop a compelling curriculum for preschool-age kids that also appeals to their parents. Scenes were interspersed with fast-paced, catchy videos teaching letters and numbers, songs sung by colorful characters and people, film clips of various real-world activities and much more. Hundreds of celebrity guests made appearances. 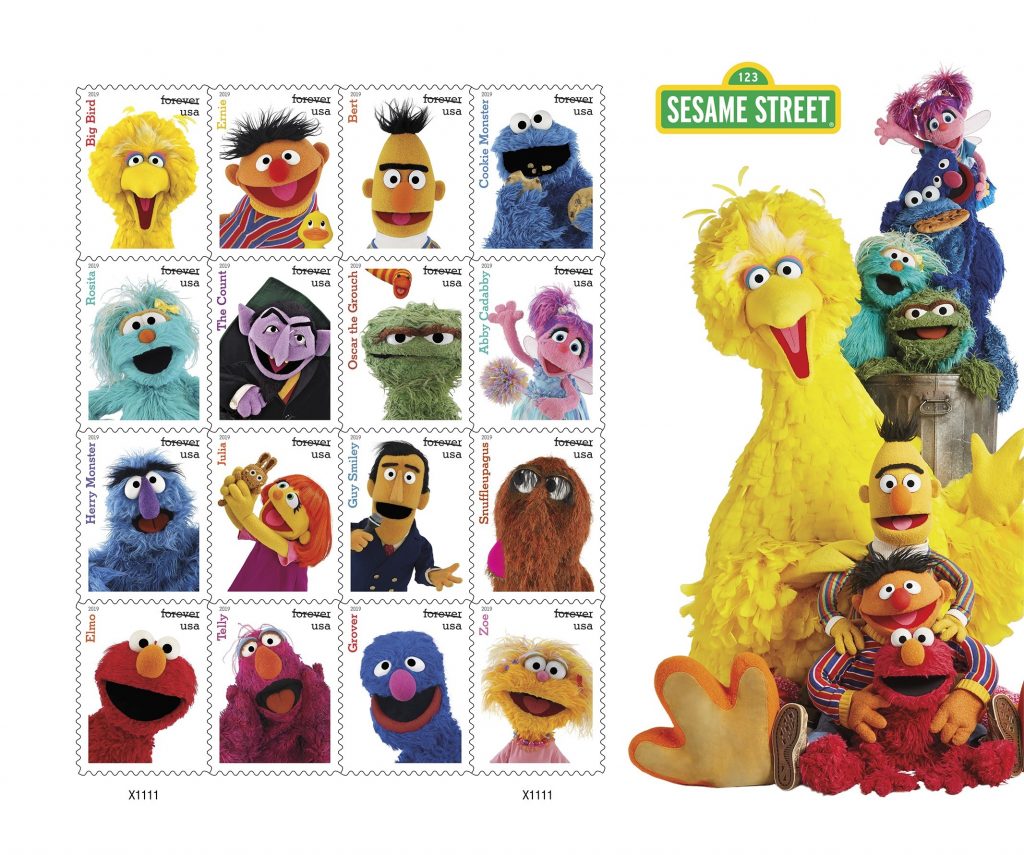 Throughout the years, the award-winning and critically acclaimed series has remained experimental, each year researching what issues are impacting kids and adapting to the various cultural and social trends of the time.

Ernie, appearing with Rubber Duckie, lives in the basement of 123 Sesame Street with his best friend Bert.

Serious and easily frustrated, Bert is the perfect comedic complement to lighthearted Ernie.

Rosita — full name Rosita la Monstrua de la Cuevas, meaning “the monster of the caves” — hails from Mexico and speaks both English and Spanish. She is sensitive, playful and compassionate, and she loves teaching Spanish to her friends and viewers at home.

Count von Count, also known simply as The Count, has an obsession for counting. The Count and his distinctive manner of speaking make him an eccentric addition to Sesame Street’s cast of characters.

Trash can dweller Oscar the Grouch is a lovable grouch who gives kids permission to be grumpy sometimes.

Abby Cadabby is a 3-year-old fairy-in-training. Her hard work and persistence as she tries to cast spells model problem solving and the value of sticking with something.

Herry Monster is big, gruff-voiced and very athletic. Despite his hairy, rough exterior, he has a huge heart and is instantly lovable.

Julia, one of the most recent additions to the Sesame Street cast, is a 4-year-old with autism who likes to paint and pick flowers. She and her friends demonstrate a more compassionate understanding of children with autism spectrum disorders.

With his boisterous voice and goofy personality, television host Guy Smiley has parodied countless game shows over the years.

Snuffleupagus (Snuffy) loves playing with his best friend Big Bird; they share many adventures on Sesame Street as they help each other make sense of their world.

The furry red monster with an orange nose, Elmo is a much-beloved character. His contagious giggle and cheerful outlook have won over generations of preschool viewers.

Prone to worry, Telly often needs help from his friends to calm down, cope with strong emotions and focus. His earnest nature and relationships with others give kids a better understanding of the ups and downs of friendship.

A longtime Sesame Street favorite, Grover is beloved for his positive attitude, willingness to help others and many imaginative alter egos.

Zoe is an energetic 3-year-old who loves to dance and sing. She is confident and strong-willed, but sometimes needs help from her friends to label and manage her big feelings.

Customers may purchase stamps and other philatelic products through The Postal Store at usps.com/shop, by calling 800-STAMP24 (800-782-6724), by mail through USA Philatelic or at Post Office locations nationwide. Information on ordering first-day-of-issue postmarks and covers is at usps.com/shop under “Collectors.” A video of the ceremony will be available on Facebook.com/USPS.