CHICAGO — Nearly two weeks after 27-year-old Kierra Coles was last seen, her fellow postal workers joined the search effort Sunday in Chatham, passing out flyers with hopes someone will recognize her.

Her close friends, family and co-workers say they’re especially worried because Coles is normally in close contact and accessible on social media platforms like Snapchat, according to Mack Julion, President of the National Association of Letter Carriers’ Chicago chapter.

“And so it was very unusual for her to come up missing. So we’re not going to rest until we find her,” Julion said.

Coles is three months pregnant, and was last seen leaving her apartment at 81st and Vernon on October 2. She had moved into the area very recently. Surveillance video shows her dressed in her work uniform walking past her car and then out of frame. 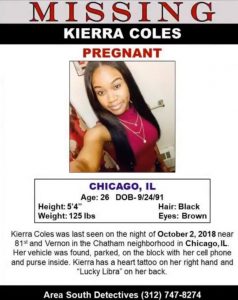