WASHINGTON — In celebration of Hot Wheels’ 50th anniversary, the U.S. Postal Service will issue 20 Forever stamps showcasing some of the most outrageous car designs from Hot Wheels.

For the first time, Hot Wheels car designs will grace the face of Forever stamps for fans of all ages to enjoy. Arranged in diagonal rows, the 20 stamps showcase photographer Len Rizzi’s images of 10 Hot Wheels cars — two of each design — speeding along a bright orange track. 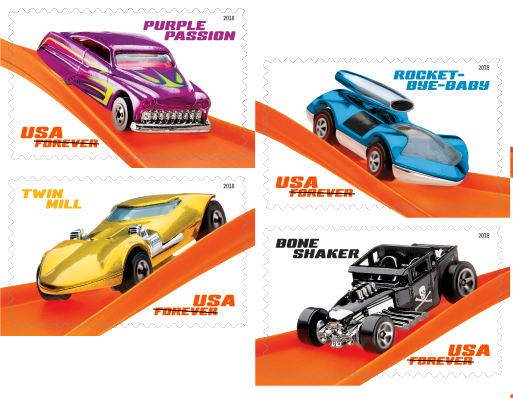 Each stamp features the name of the vehicle shown in one of the top corners and the words “USA” and “Forever” in one of the bottom corners. The iconic Hot Wheels logo appears in the top right corner of the pane. The back of the pane displays the Hot Wheels 50th anniversary logo. The stamps will be dedicated during a first-day-of-issue ceremony on a date and location to be announced soon.

The miniature Hot Wheels depicted are:

• The aptly named Purple Passion (1990), a super sleek metallic purple and green model. The car remains a favorite of collectors.

• Equipped with a roof-mounted rocket, the Rocket-Bye-Baby (1971) is one of the most aggressive racers in Hot Wheels history.

• Perfect for Halloween, the spooky Rigor Motor (1994) is a coffin-shaped hot rod that is powered by a huge engine adorned with two skulls.

• A spectacularly powerful version of a classic muscle car, the Rodger Dodger (1974) has a giant engine bursting out of its hood.

• With a twin turbo V6 hybrid engine and wide front air intakes built to look like a predatory fish, the Mach Speeder (2018) is a true 21st-century racer.

• The Twin Mill (1969) is one of the most iconic Hot Wheels cars of all-time. The speed machine features dual big-block engines.

• The distinctive Bone Shaker (2006) is a hot rod with a fierce-looking skull for a grille. The car has a massive short-block engine made to rattle your bones.

• The HW40 (2008), a car introduced to celebrate the 40th anniversary of Hot Wheels, features a jet turbine engine. The space-age vehicle features a futuristic glass hood.

• The original surfboard-toting Deora (1968) was included in the first Hot Wheels line. The souped up Deora II, showcased on the stamp, came out in 2000.

• The Sharkruiser (1987) is a carnivore on wheels. The completely unique design features fins, a tail, a sharp-toothed grille, and a roaring V8 engine.

William J. Gicker was the project’s art director. Greg Breeding designed the stamps and was the typographer.

Hot Wheels was born when Mattel co-founder Elliot Handler challenged his design team, which included a General Motors car designer and a rocket scientist to create a toy car that was cooler and performed better than anything on the market. Mattel soon introduced its iconic orange tracks, which provided children unlimited ways to test out stunts and racing skills. The Hot Wheels toy line expanded rapidly. Since the inception of Hot Wheels, Mattel has produced thousands of varieties of cars. In 2011, Hot Wheels was inducted into the National Toy Hall of Fame. Today, children and their parents still love racing the eye-poppin’, colorful, lightning-fast cars.