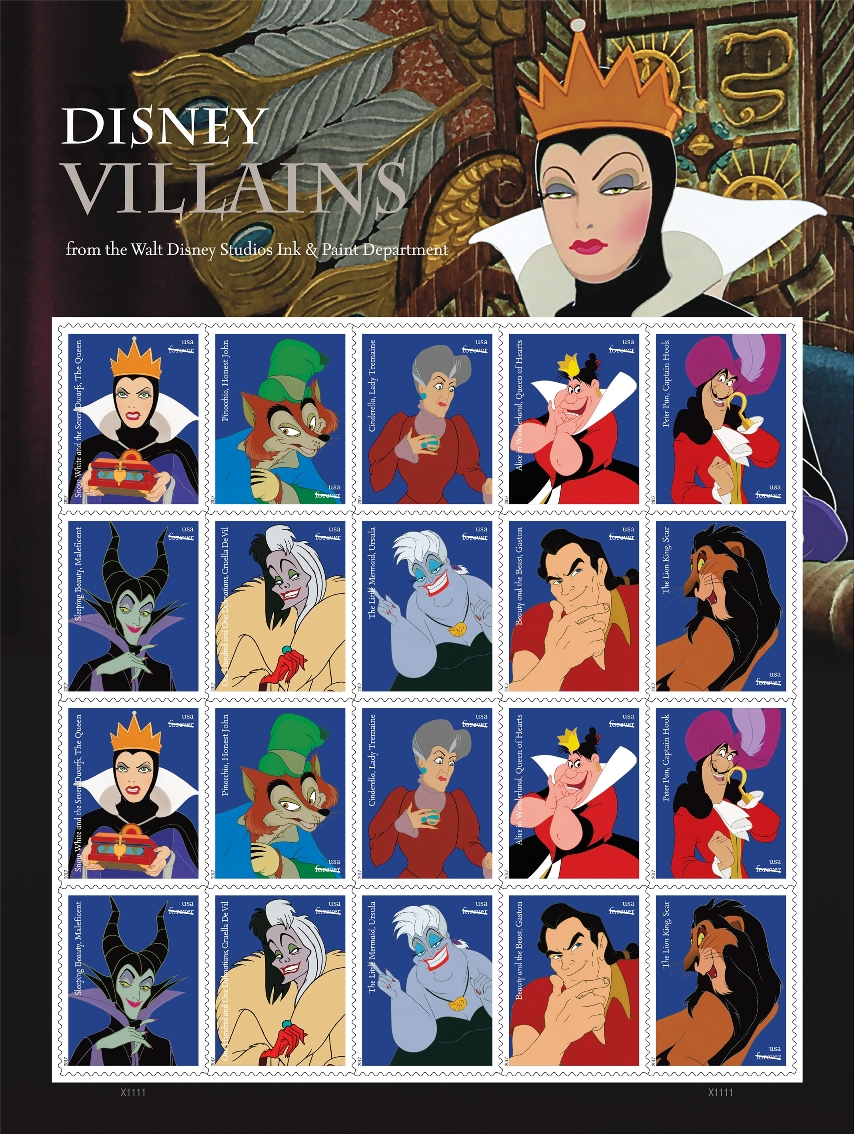 The Disney Villains Forever stamps will be dedicated at 1:30 p.m. PDT July 15, during D23 Expo 2017, Disney’s ultimate fan event at the Anaheim Convention Center, Center Stage. The public is encouraged to share the news on social media using the hashtag #DisneyVillainsStamps. Beginning June 22, the stamps may be pre-ordered at usps.com/shop for delivery shortly after the July 15 issuance.

Admission is limited to the ceremony that is standing room only. You may RSVP at usps.com/disney; however, this does not guarantee admission. Additional instructions will be provided. D23 Expo 2017 ticket holders do not need to RSVP.

Each stamp showcases one of 10 classic Disney villains against a blue background.

From left: Maleficent (Sleeping Beauty), Cruella De Vil (One Hundred and One Dalmatians), Ursula (The Little Mermaid), Gaston (Beauty and the Beast) and Scar (The Lion King).

The words “USA” and “Forever” appear in the top right corner or bottom right corner of each stamp and the name of the classic villain and the movie in which the character appears runs along the left edge.

One of the first groups of its kind, Disney’s Ink & Paint Department was yet another stop on the road to creating an animated film. After the animators’ pencil drawings were finished, they went to Ink and Paint. There, highly specialized artists meticulously recreated each pencil line in ink, capturing every nuanced movement and expression. At first, artists used black and white, and later shades of gray to “color” each celluloid or cel. In the early 1930s, the artists began using rich colors on the animation cels.

The last full-length animated Disney film to use the hand-painted cel process was The Little Mermaid (1989). Beauty and the Beast (1991) and The Lion King (1994) were hand drawn. The original pencil drawings for those films were then scanned and painted digitally. For these stamps, the characters Gaston (Beauty and the Beast) and Scar (The Lion King) have been recreated using traditional ink and paint techniques.

The Disney Villains from the Walt Disney Studios Ink & Paint Department stamps are being issued as Forever stamps that are always equal in value to the current First-Class Mail service one-ounce price.