LINCOLN, NE — The U.S. Postal Service celebrated the 150th anniversary of Nebraska statehood today by issuing a Forever stamp depicting a photograph taken on the banks of the Platte River as sandhill cranes flew low overhead at sunset. Nicknamed the Cornhusker State, the 37th state admitted to the union also ranks 37th in population with almost 1.9 million residents.

Followers of the U.S. Postal Service’s Facebook page can view streaming video of the event at facebook.com/USPS. The public is asked to share the news on Twitter and Instagram using the hashtags #NebraskaStamps and #NebraskaStatehood. 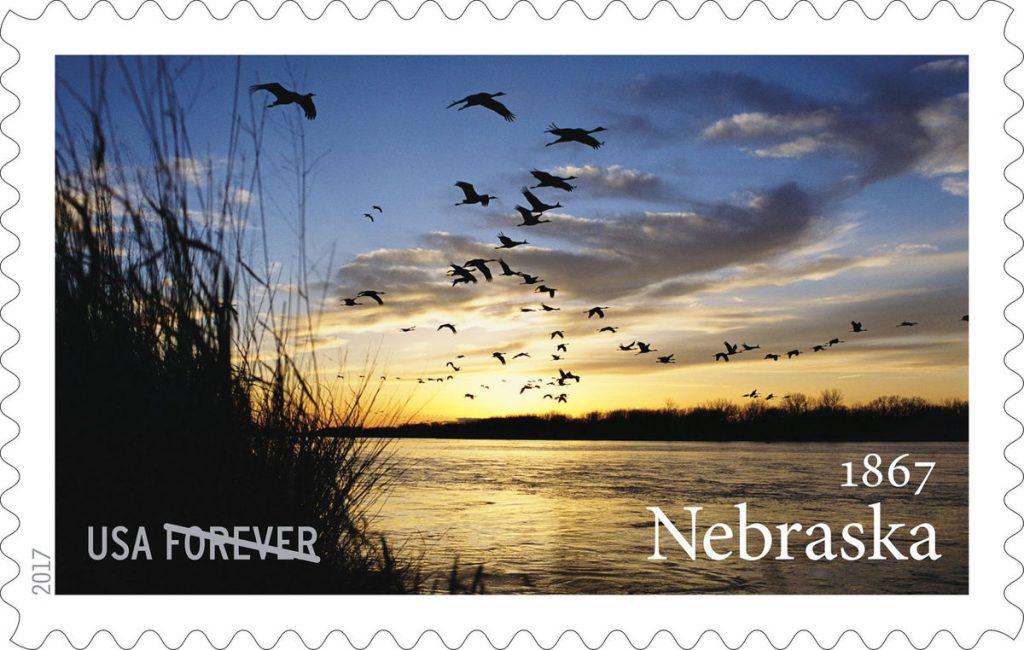 “This commemorative postage stamp from U.S. Postal Service is helping Nebraska celebrate our sesquicentennial anniversary,” said Ricketts. “Thank you to Mr. Forsberg for capturing such a breathtaking photo depicting our state’s true beauty. It’s hard to imagine an image that truly embodies Nebraska’s immense beauty more than one depicting the famed sandhill cranes flying into the Nebraska sunset over the glowing Platte River. It’s one of the reasons so many know Nebraska as the Good Life.”

Territorial Nebraska was part of the Louisiana Purchase of 1803, the French land sale that nearly doubled U.S. territory. At the time, the territory of Nebraska included not only its present-day area, but also portions of present-day Colorado, the Dakotas, Wyoming and Montana. Enormous buffalo herds on the plains had provided generations of sustenance to the Native American Pawnee people and many other area tribes. Decades after Lewis and Clark explored the newly purchased territory, the U.S. government still considered the land virtually useless — ironic in that Nebraska is now one of the nation’s agricultural giants, particularly in the production of beef, corn and beans.

The photo that took more than a month to capture
Growing up in Nebraska, Forsberg has dedicated much of his career to photographing wildlife on North America’s Great Plains. The first time he photographed sandhill cranes was in high school. Over the years he has become very familiar with their routine.

Sandhills can grow to nearly 4 feet tall with a wingspan of nearly 6 feet. Their migration patterns begin as far away as Siberia and Alaska. They winter in parts of Florida, Texas, New Mexico, Arizona, Utah, California and Mexico. At the onset of spring, half a million of these ancient birds return to the Platte River during their annual migration — a spectacle unique to Nebraska. After a day spent feeding in crop fields, wetlands and prairies nearby, they are seen in Forsberg’s photograph scouting for shallow sandbars that provide nighttime roosts safe from riverbank predators.

“Each March, the Platte River in south-central Nebraska is the stage for one of the greatest wildlife spectacles in North America,” said Forsberg. “Here, millions of migrating birds in the Central Flyway, including a half million cranes, funnel through the Platte River Valley for weeks to rest and refuel while on a long migratory journey between southern wintering grounds and northern nesting grounds. It is the largest gathering of cranes anywhere in the world.

“For this photo, I wanted an image that pulled back and tied together the river, prairie, sunset and cranes flying through the frame. It required scouting a blind location weeks in advance of their passage,” he said.

He constructed his small one-man blind of garden fence and hay and left it there for weeks, undisturbed, to blend naturally into the riverbank and unnoticeable to the cranes. Clad in a camouflage suit from head to toe and armed with a wide angle lens and sleeping bag, he would get into the blind in the afternoon while birds were away feeding and remain there on the ready — before they flew in near sunset, and not leave until after they flew away the next morning.

“It’s not unusual to go days without getting the shot you want. Wildlife photography is a profession where you accept failure on a regular basis, and it requires patience, persistence and a lot of luck. It took me most of the month of March to finally make this photo.

“Nebraska is a prairie state and is driven by an agricultural economy. Thanks to dedicated conservation efforts and a strong history of stewardship, part of our natural heritage still survives,” he added. “In addition to these massive migrations, Nebraska also is home to bison, river otters, trumpeter swans, bighorn sheep, mountain lions, swift fox, prairie chickens and burrowing owls just to name a few. I bet that surprises a lot of people that think Nebraska is just one big cornfield.”

Art director Derry Noyes of Washington, DC, designed the stamp. This Forever stamp will always be equal in value to the current First-Class Mail one-ounce price.