The event unveiled 11 US Postal Service stamps to commemorate de la Renta, who died in October 2014, at the end of a New York fashion week striking for its virulent opposition to Donald Trump. 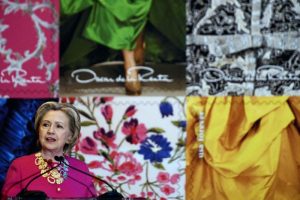 “Oscar de la Renta was an immigrant,” said Clinton, the former Democratic presidential nominee in a rare speech since her loss to Trump last November.

“And aren’t we proud and grateful that he was,” she said to cheers from the well-heeled audience that included members of high society and the designer Ralph Lauren, whose parents were also immigrants.

“What a fitting person to be chosen by our postal service, mentioned by the way in the constitution — something we should all read and re-read in today’s times,” she said to more cheers.

“Let there be many, many more immigrants with the love of America that Oscar de la Renta exemplified every single day,” she added.