A pre-winter storm delivered more than 20 inches of snow in some parts of New York last week — turning a Postal Service employee into an international news figure along the way.

Pamela Bentley, a Cropseyville, NY, retail associate and distribution clerk, went to the nearby Grafton Post Office to help out after the storm hit. While shoveling the sidewalk, news photographer Mike Groll snapped her picture. 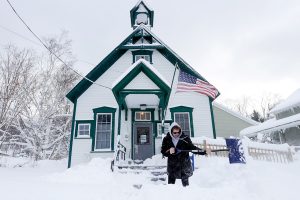 The image shows an intrepid Bentley, wearing a long coat and hood, tossing a shovel-full of snow. The cozy Grafton Post Office looms behind her, an American flag waving from its perch near the front stoop.

The Associated Press picked up the shot and distributed it to news organizations across the world, including the Wall Street Journal, which published the picture on its front page.

Grafton was surprised — and so were her co-workers and customers.

“Being a small town, they were all excited that Grafton got such a headline in such a worldwide paper,” she said.

The image also appeared on news sites for The Washington Post, San Francisco Chronicle, CNN and Spanish-language publications, among others.

Bentley, who joined USPS two years ago, is taking her newfound fame in stride.

She’s focused on doing her job, but she admits the popularity of the photo is “pretty cool.”