Flett was 18 years old when she was hired in 1956 at Royal Mail Canada, which would later become Canada Post. 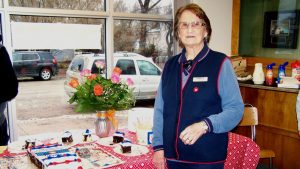 Over her more than 60 years working at the Winnipegosis, Man., post office, she’s watched an industry change dramatically  — from the 1950s when letters, parcels and postcards were sorted by hand to the introduction of postal codes, to now, when letters can be sent with the click of a button.