Kwanzaa, an annual non-religious holiday taking place over seven days from Dec. 26 to Jan. 1, brings family, community and culture together for many African-Americans. This year, Dec. 26 marks the 50th anniversary of the widely celebrated holiday.

The public is asked to share the news using the hashtag #KwanzaaStamps. 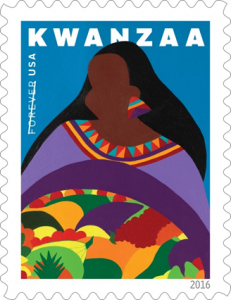 “Kwanzaa celebrations focus on the importance of family, community and culture, and reflect some of the core values of African culture,” said U.S. Postal Service Deputy Postmaster General and Chief Government Relations Officer Ronald Stroman. “The stamp’s bold colors depict a young African-American woman as the embodiment of Africa, with her dress collar and matching earring featuring an African design. The image shows her holding a large purple bowl overflowing with fruits and vegetables, symbolizing the abundance of African first harvest celebrations that inspired the creation of Kwanzaa,” Stroman added, referring to the work of stamp artist Synthia Saint James.

“We are honored that the United State Postal Service has chosen to unveil the new Kwanzaa stamp in Charleston at our MOJA festival where we celebrate African-American and Caribbean arts throughout the city,” said Tecklenberg. “This is a fitting backdrop for the dedication of the Kwanzaa stamp, which pays tribute to the holiday that honors the community and values of African culture.”

“What an incredible honor,” said Saint James. “I was first commissioned to create the painting for the first Kwanzaa Stamp in 1996, which was released in 1997. Now a brand new Kwanzaa Forever Stamp, nearly 20 years later, celebrates the 50th anniversary of the Kwanzaa holiday. I’m jazzed, elated and thrilled.

In my first Kwanzaa stamp, I highlighted the sixth day of Kwanzaa — the celebration of the principle of ‘Kuumba’ creativity and the Kwanzaa feast. The emphasis of this stamp is ‘First Fruits’ equal Kwanzaa, and the affirmation for both spiritual and material abundance in our lives. For this stamp, the African-American woman, adored with symbols of the Ndebele Tribe on her earring and on her dress, is offering us all to partake from her overflowing bowl of first fruits in celebration of the Kwanzaa holiday.”

Growing up in New York and later Los Angeles, where she resides today, Saint James always knew she wanted to be an artist. Self-taught, she developed an artistic style that is uniquely and recognizably her own.

She sold her first painting at age 20 — a commissioned piece for a coworker — which helped launch her artistic career. A professional artist for more than 45 years, she has worked with clients such as Barnes and Noble, Maybelline, UNICEF, “Essence” magazine and The Coca-Cola Company, among others. Saint James created the original cover art for Terry McMillan’s novel “Waiting to Exhale” and has illustrated and/or authored 17 children’s books. Her work has been exhibited internationally and has appeared in several United States embassies around the world.

With bright, bold colors, Saint James’s striking paintings convey the joy and vibrancy of her subjects. Inspired in part by French Impressionists, she focuses on shapes and overall visual effects, using as many as nine coats of paint to get the colors just right.

Kwanzaa’s History
Created in 1966, Kwanzaa draws on African traditions, deriving its name from the phrase “first fruits” in Swahili, a widely spoken African language. It has its origins in celebrations that occurred across the African continent in ancient and modern times. Kwanzaa synthesizes and reinvents these traditions as a contemporary celebration of African-American culture.

Each year, millions of African-Americans gather with friends and family around a table set with themkeka — a straw mat symbolizing the history of African-Americans. They light seven candles known as the mishumaa saba, and share in a feast that celebrates their common heritage. Kwanzaa is a festive occasion to rejoice in the prospect of health, prosperity and good luck in the coming year, while also recalling the past and its role in future happiness.

This is the sixth stamp design issued by the U.S. Postal Service in celebration of Kwanzaa. The first Kwanzaa commemorative stamp was issued in 1997. New designs also were issued in 2004, 2009, 2011 and 2013.

This Kwanzaa stamp is being issued as a Forever stamp, meaning it will always be equal in value to the current First-Class Mail 1-ounce price.

Ordering First-Day-of-Issue Postmarks
Customers have 60 days to obtain the first-day-of-issue postmark by mail. They may purchase new stamps at local Post Offices, at The Postal Store website at usps.com⁄shop or by calling 800-782-6724. They should affix the stamps to envelopes of their choice, address the envelopes to themselves or others and place them in a larger envelope addressed to:

After applying the first-day-of-issue postmark, the Postal Service will return the envelopes through the mail. There is no charge for the postmark up to a quantity of 50. There is a 5-cent charge for each additional postmark over 50. All orders must be postmarked by Dec. 1, 2016.

Ordering First-Day Covers
The Postal Service also offers first-day covers for new stamp issues and Postal Service stationery items postmarked with the official first-day-of-issue cancellation. Each item has an individual catalog number and is offered in the quarterly “USA Philatelic” catalog, online atusps.com⁄shop, or by calling 800-782-6724. Customers may request a free catalog by calling 800-782-6724 or writing to: