Neighbors in the an Atlantic Beach neighborhood say a postal carrier left packages on top of their mailboxes several times last week. 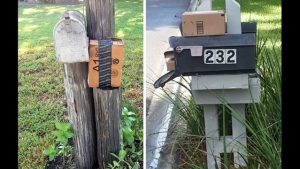 Neighbors in the Ocean Walk neighborhood said their usual mail carrier brings the packages to the door.

They said this past week, they believe they had a substitute.

Julian Johnson does tree work in the area and saw what neighbors were talking about.

“I’ve seen a lot of that stuff and the mail shouldn’t do that kind of stuff,” Johnson said.