When the government planned to make it easier for mutual funds to quit sending investors millions of thick reports in the mail each year, the paper industry got involved.

The Journal reports that the funds spend more than $300 million every year printing annual reports that are often tossed in the trash unread. It takes 2 million trees to print out the 440 million reports every year.

So the Securities and Exchange Commission last year proposed a rule change that would have made it easier for funds to satisfy reporting requirements by providing annual reports online to shareholders who opted out of paper reports. 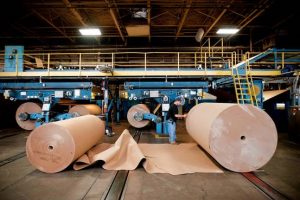 But what was logical progress to some loomed as a menace to others—notably the American Forest & Paper Association and the Envelope Manufacturers Association. The two industries’ jointly funded group Consumers for Paper Options rallied retiree and consumer groups to join their campaign, decrying what they call the government’s “rush to digitize.” They persuaded a bipartisan coalition of politicians—especially from the paper-heavy state of Maine—to threaten legislation blocking the rule.

They prevailed, beating back the forces of the 21st century, at least for a few more years.

The Journal says the government proposal wouldn’t have eliminated all printed reports- it would simply have made online digital reports the default choice. Shareholders would still have the option to receive hard copy reports, and they would always receive a hard copy notice by mail whenever a report was issued.

That wasn’t enough for the paper lobby- and so far they’ve managed to prevent the proposed rule from taking effect.

Source: Print Is Dead? Not in Mutual-Fund Reports – WSJ