WASHINGTON — The U.S. Postal Service honors Henry James (1843–1916), a towering figure in American literature, with a non-denominated three-ounce-rate stamp. The stamp, issued today and priced at 89 cents, is the 31st entry in the Literary Arts stamp series.

In novels and stories that often explored the complex interplay between Americans and Europeans, James sought to portray the intricacies of society and the inner lives of his characters with exquisite realism, an intellectual and artistic achievement that earned him a reputation as one of the greatest writers the United States has ever produced. 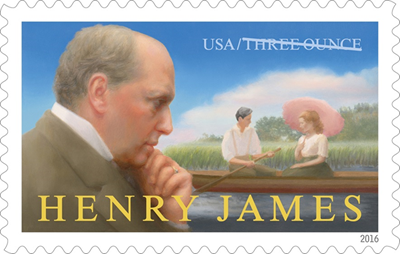 The stamp features an original painting by artist Kate Sammons of Los Angeles under the art direction of Antonio Alcalá of Alexandria, VA. On the left is a portrait of James based on a 1906 photograph by Alvin Langdon Coburn. It shows the author in profile looking to the right, his left hand on his chin in a gesture of contemplation.

On the right side, behind James, is a vignette showing a man and a woman in a small boat; the man holds an oar, while the woman shades herself with a pink parasol. This vignette is an artistic interpretation of the climactic scene from The Ambassadors, James’s 1903 novel in which a middle-aged American is sent by his wealthy fiancée to Europe, presumably to rescue her son from a woman she believes must be bad for him – the two people represented in the boat.

Even though James was born in New York City, he traveled extensively and resided in a number of different places in Europe, giving his writing a distinctive international flavor. James’s literary output was prodigious: 20 complete novels, more than 100 shorter pieces of fiction, several plays and hundreds of shorter works and articles, including travel observations, literary criticism and theater reviews.  Two of his most well-known stories include Daisy Miller and The Turn of the Screw. His other works included The American, The Portrait of a Lady, The Bostonians, The Wings of the Dove and The Art of Fiction, among many others.

During James’s lifetime, readers were often drawn to his novels and short stories for their accounts of passionate friendships, love affairs, and marriages that were unhappy and rife with conflict. His contemporaries also admired his realistic and thoughtful portrayals of women, especially strong, autonomous heroines failed by men and betrayed by other women. His eye for human nature has stood the test of time; interest in his work surged in the 1930s and continues to this day. His novels and stories have inspired numerous stage and radio adaptations, followed more recently by major television versions and Hollywood films, confirming that our distance from the bygone cosmopolitan society he described makes the human conflicts he explored no less relevant, illuminating and engaging.

On the new stamp, the words “THREE OUNCE” indicate its usage value. Like a Forever Stamp, this stamp will always be valid for the rate printed on it.

Ordering First-Day-of-Issue Postmarks
Customers have 60 days to obtain the first-day-of-issue postmark by mail. They may purchase new stamps at their local Post Office, at The Postal Store website at usps.com⁄shop or by calling 800-782-6724. They should affix the stamps to envelopes of their choice, address the envelopes (to themselves or others) and place them in a larger envelope addressed to:

After applying the first-day-of-issue postmark, the Postal Service will return the envelopes through the mail. There is no charge for the postmark up to a quantity of 50. There is a 5-cent charge for each additional postmark over 50. All orders must be postmarked by Oct. 1, 2016

Ordering First-Day Covers
The Postal Service also offers first-day covers for new stamp issues and Postal Service stationery items postmarked with the official first-day-of-issue cancellation. Each item has an individual catalog number and is offered in the quarterly USA Philatelic catalog, online atusps.com⁄shop or by calling 800-782-6724. Customers may request a free catalog by calling 800-782-6724 or writing to: