From Communities and Postal Workers United:

Dozens of postal workers, retirees, and community allies turned out this afternoon to celebrate the 241st birthday of the US Post Office. Postal unions have called on President Obama to declare July 26th Postal Heritage Day.

Chanting, marching through the Main Post Office in downtown Portland, singing and eating birthday cake, the crowd listened to postal defenders, including Benjamin Franklin, the first postmaster general in 1775.

Franklin, looking none the worse for his years, was apparently rolling in his grave, itching to bring a revolutionary message to today’s postal supporters. 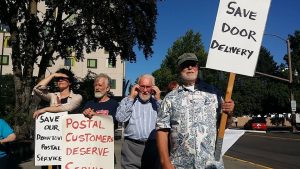 “The postal service is under assault. Over 200,000 good union jobs have been lost in the past ten years as post offices and mail processing plants have been cut and closed. Mail is being delayed. At-the-door delivery is on the chopping block.

“The postal service is not broke, but the agenda of the 1% and their friends in Congress is to cripple the USPS, to soften it up for union busting and privatization. The USPS is a $67 billion annual business with over $100 billion surplus in its pension and retiree health benefit funds, over 30,000 post offices and 200,000 vehicles. We’re facing a huge transfer of public wealth to Wall Street investors,” said the elder statesman.

Reverend John Schwiebert, speaking on behalf of Portland Communities and Postal Workers United, expressed concern about the demolition of Portland’s Main Post Office. “The Main Post Office in downtown Portland will be replaced, either at its current location or close by.

“We need postal officials, the City of Portland and members of Congress to hold immediate public hearings to hear from postal customers,” said Schwiebert.