They were acknowledging a real act of derring-do: Moskal saved the life of a 14-year-old girl who was being choked by a 300-pound man. 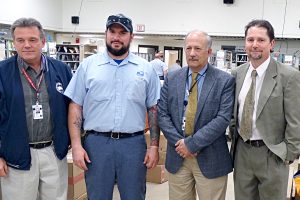 Moskal heard the teenager screaming on her porch while he was delivering mail. By the time he reached her, she was unconscious, bleeding — and still in the grip of her attacker.

Moskal threw the man to the ground and, with a neighbor’s help, restrained him until police arrived.

A district police chief told The Buffalo News that the attacker, a 29-year-old man with a history of mental health problems, targeted the girl randomly.

Moskal and the neighbor saved her life, the chief said.

The teen was treated at a hospital. The suspect was hospitalized at a psychiatric facility and expected to face charges upon his release.

“We are proud that you are one of us,” Westside Station Customer Services Manager Paul Urbanski told Moskal at a ceremony honoring him. “We all aspire to be like you — a true hero.”