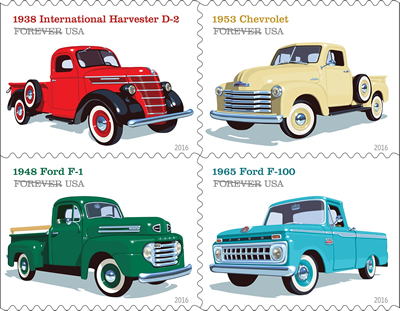 SYRACUSE, NY — The U.S. Postal Service celebrated the rugged and reliable work vehicles that Americans have driven for nearly a century today with the dedication of the Pickup Trucks Forever stamps that highlight four iconic models: the 1938 International Harvester D-2; the 1948 Ford F-1; the 1953 Chevrolet; and the 1965 Ford F-100.

“The pickup truck embodies America’s strong work ethic — the work it takes to transport the country’s building blocks, to operate our nation’s agricultural centers and to grow our businesses and communities,” said U.S. Postal Service Chief Human Resources Officer and Executive Vice President Jeff Williamson. “They symbolize the strength, ruggedness and grit of the millions of hard working men and women that have and continue to build our great nation. For the significant contributions pickup trucks have made in molding this country’s landscape and revolutionizing how we transport ourselves and our goods, we proudly honor these four iconic trucks.”

Pickup Profiles
The origin of pickup trucks can be traced back to the early 20th century, when automobiles first became popular in the United States. The trucks made personally hauling cargo, which once was the job of horse-drawn wagons, easier than ever. By the early 1900s, several manufacturers began producing light-duty trucks in limited numbers.

The first fully factory assembled pickup truck didn’t arrive until the middle of the next decade, when the 1925 Ford Model T Runabout with Pick-Up Body made its debut. A fortified version of Ford’s landmark Model T, it had a base price of $281, featured a steel bed, and was powered by a modest 20-horsepower engine. Ford sold nearly 34,000 Model T pickups, helping kick start the popularity of pickup trucks.

Automaker Studebaker used the word “pickup” in an advertisement in 1913, but the exact root of the term “pickup” is unclear. By the Great Depression, it had become part of the American lexicon. U.S. Federal Regulations currently classify the pickup truck as “a non-passenger automobile which has a passenger compartment and an open cargo area (bed).” 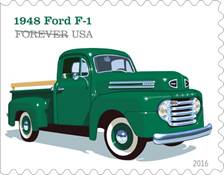 1953 Chevrolet
In 1947, Chevrolet rolled out the Advance-Design Series, the first all-new post-World War II pickup truck line. The new Chevys were roomier and more powerful than ever before. Advance-Design pickups, such as the 1953 Chevrolet, featured large windshields that provided drivers with excellent visibility, a distinctive curvy grille that bulged in the middle, and a six-cylinder engine. Advance-Design trucks were America’s top-selling pickups for nearly a decade. 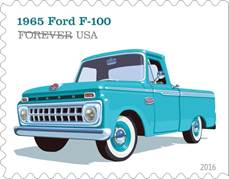 1965 Ford F-100
For the 1965 model year, the F-Series pickup got a facelift. The 1965 Ford F-100 had a new grille that featured 18 small rectangular openings. It also featured what Ford dubbed “Twin-I-Beam” independent front suspension, which improved the quality of the ride, and a powerful six- or eight-cylinder engine. The F-Series is still in production today and remains the country’s top-selling truck line. As of 2015, there have been 13 generations of F-Series pickups.

Ordering First-Day-of-Issue Postmarks
Customers have 60 days to obtain the first-day-of-issue postmark by mail. They may purchase new stamps at their local Post Office, at The Postal Store website at usps.com⁄shop, or by calling 800-782-6724. They should affix the stamps to envelopes of their choice, address the envelopes (to themselves or others), and place them in a larger envelope addressed to:

After applying the first-day-of-issue postmark, the Postal Service will return the envelopes through the mail. There is no charge for the postmark up to a quantity of 50. There is a 5-cent charge for each additional postmark over 50. All orders must be postmarked by Sept. 15, 2016.

Ordering First-Day Covers
The Postal Service also offers first-day covers for new stamp issues and Postal Service stationery items postmarked with the official first-day-of-issue cancellation. Each item has an individual catalog number and is offered in the quarterly USA Philatelic catalog, online atusps.com⁄shop, or by calling 800-782-6724. Customers may request a free catalog by calling 800-782-6724 or writing to: