Forget Benghazi and email servers- the British tabloid the Daily Mail has published this photo of presumptive Democratic Presidential nominee Hillary Clinton, apparently using a US Postal Service flat tub for private use!

The tabloid did a little digging, and concluded that Clinton could be guilty of a crime!

From the Daily Mail story:

Pictures show the boxes are clearly marked ‘not for private use’ and are marked United States Postal Service along the side. 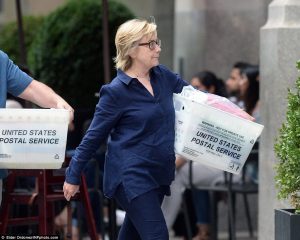 While it is not known how Clinton came by the boxes, the U.S. Code states that theft of property used by the Postal Service is punishable by a fine and up to a year in jail.

No word yet on how this may change Bernie Sanders’ alleged plan to endorse Clinton on Tuesday!!! Also no mention of the incident yet on Donald Trump’s twitter feed.

Read the original story, which has photos of cute little dogs, and Bill Clinton wearing blue suede shoes, at the Daily Mail