The US Postal Service announced earlier today that Detroit’s George W. Young Processing and Distribution Center at 1401 W. Fort St. in Detroit was without power. The USPS issued an update at 4:45 PM EDT stating that the plant was operating at reduced capacity using generators. It also reported that power might not be restored until Monday.

According to locay TZ station WDIV, the outage was the result odf a cable failure in an underground substation. 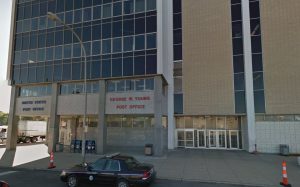 Retail operations at the facility are closed, but the Post Office Box section remains open. Employees at the facility, which also houses the Detroit District office, are being offered the choice of taking annual leave, or working at another facility. Employees are asked to call the Hotline phone number, 1-888-363-7462, for reporting instructions.

Drop shipments are being redirected as follows:

The USPS will post updates on its Service Disruption page.