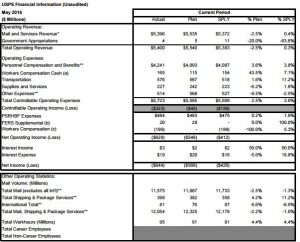 The US Postal Service lost $323 million in the month of May, according to a preliminary report filed with the PRC on Friday. When accounting entries required by the 2006 PAEA law are added in, the operating loss climbs to $644 million. For the fiscal year to date, the USPS operating surplus stands at $1.8 billion. After PAEA charges, the USPS reports a YTD loss of $2.6 billion.

The agency’s budget was squeezed by the price cut that took effect in April, along with a 1.3% drop in mail volume. Revenue was up by just three tenths of a percent, while expenses climbed by almost four percent. The tiny revenue increase was due entirely to continued growth in shipping and package services, which have a lower profit margin than traditional mail.

Total workhours were 4.1% higher than in May of last year.