When it comes to financial statements, paper’s still popular.

Even in an increasingly digital world, even after years of banks pushing consumers toward e-statements with rewards or fees, more than half of consumers continue to have paper financial statements delivered by mail, says a new CreditCards.com national poll of 1,000 U.S. adults.

Go online, say banks
The federal E-Sign Act, enacted in 2000, allows financial institutions to send electronic statements, if a consumer makes that choice. If it were up to the banks, we’d all be getting e-statements and sending e-payments. They’re substantially less expensive. 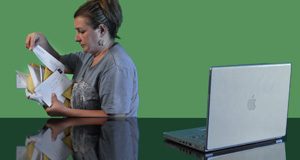 A 2015 study by the U.S. Postal Service examined the costs that an undisclosed, large utility company spent sending and processing payments by paper versus electronically. The utility spent 6 cents to send and process a consumer’s payment electronically. To send the bill by paper and get a paper check back cost nine times more – 53 cents.

Other financial institutions chose to offer carrots rather than wield sticks. Many community banks and credit unions, for example, offer rewards checking accounts, which can yield rates as high as 3 percent or 4 percent, but customers typically must agree to receive electronic statements, as well as use their debit cards a certain number of times each month and receive direct deposits.

Why people like paper statements
Those with a preference for paper say:

Why people like e-statements
Those who use digital statements base their preference on:

Online access concerns
The practice of reviewing statements online is a major concern for the National Consumer Law Center (NCLC), which earlier this year did a study on paper statements.

“Electronic statements might seem cool and environmentally friendly, and paper statements may seem old-fashioned, but paper is just easier to review,” says Chi Chi Wu, an attorney who co-wrote the NCLC report.

By not reviewing their credit card statements, cardholders miss out on important information such as the card’s interest rate and minimum payment information, and they won’t notice if fraudulent transactions occur.

Consumers who overlook online notifications and miss a payment concern Ben Rogers, managing director of research for the Filene Research Institute, a think-tank for the credit union industry. “It can do a lot of things pretty quickly to your credit,” including late fees and higher interest rates.

Reviewing matters most
Bruce McClary, spokesman for the National Foundation for Credit Counseling, says the format of statements isn’t as important as looking at them. “Whichever one you pay the most attention to is the one you should get,” he says.

Regardless of which delivery method you choose, “It’s so very important people keep an eye on their monthly statements. You can see what happens and react in real time.”

Survey methodology
The 2016 CreditCards.com financial statements survey was conducted by Princeton Survey Research Associates International via telephone interviews with a nationally representative sample of 1,000 adults living in the continental United States from June 2-5, 2016.  Statistical results are weighted to correct known demographic discrepancies. The margin of sampling error for the complete set of weighted data is plus or minus 3.7 percentage points.

See related: 8 FAQs about switching from paper to online statements (and back again)