The Postal Service will release stamps next week to honor the bravery of the U.S. armed forces.

The four stamps will highlight the Army’s Distinguished Service Cross, the Navy Cross for the Navy and Marine Corps, the Air Force Cross and the Coast Guard Cross. 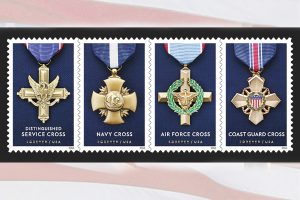 The medals are awarded to service members for acts of extraordinary heroism in which an individual braved enemy fire, made bold decisions and took selfless actions to rescue or protect fellow service members.

Many recipients died or were severely wounded as a result of the heroic actions for which they were honored. Others died in subsequent battles before receiving the award for earlier actions.

The Honoring Extraordinary Heroism: Service Cross Medals stamps will be issued in a pane of 12 at the World Stamp Show May 30, which is Memorial Day.