A package left at the Pottsville Post Office on Friday morning forced the building to be closed and a state police bomb squad be called in to assist local authorities.

The package, however, was deemed hours later not to be dangerous. 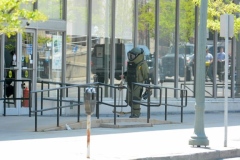 Karen Mazurkiewicz, assigned to the USPS Corporate Communications office in Buffalo, New York, said the Pottsville Post Office has a 24-hour lobby and that the package was left there while the retail portion or windows were closed.

When the retail workers arrived, they found the package left unattended and that it did not have the proper amount of postage for mailing, she said.

Following protocol, Mazurkiewicz said, the package was deemed suspicious and the proper steps initiated for the safety concerns of both postal workers and the public.