The Wall Street Journal reports that Wal-Mart is testing a shipping subscription service similar to Amazon Prime. There’s no suggestion that the US Postal Service would be part of the plan- rather, Wal-Mart would use regional delivery companies to handle the last mile: 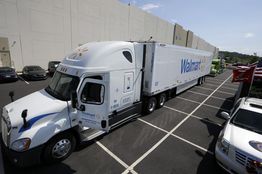 As part of the project, Wal-Mart will rely on eight massive e-commerce warehouses around the country, the last of which will be built by year’s end. It will also tap regional carriers to deliver more of its packages, say people familiar with the matter. That is a shift away from FedEx Corp., which handles the bulk of Wal-Mart’s parcels.