A mother and her daughter will be spending Mother’s Day in jail together after they were arrested for possession of stolen mail, a USPS “arrow” key, and drugs.

From the Pasadena Star News: 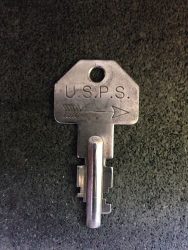 Estela Castaneda, 48, of Huntington Park and daughter Elizabeth Castaneda, 22, of Rosemead, were arrested just after midnight Friday following what began as a routine traffic stop for a traffic violation in the 1300 block of Bradbury Road, according to San Marino police officials and Los Angeles County booking records.

Officers soon noticed that the driver, Estela Castaneda, and her daughter had pieces of mail and checks that had been stolen in Arcadia, along with a U.S. Postal Service lock and master key, or “arrow key,” San Marino police Detective Sgt. Timothy Tebbetts said in a written statement.

As police were booking the women into jail at the Alhambra Police Department, jail guards found the mother hiding “a substance resembling methamphetamine,” the sergeant said.