WASHINGTON — A stunning star trail photograph comprised from 200 images was previewed today to celebrate Washington’s Mount Rainier as the 13th of 16 Forever Stamp images to be revealed over a three-week period to celebrate the National Park Service’s 100th anniversary. 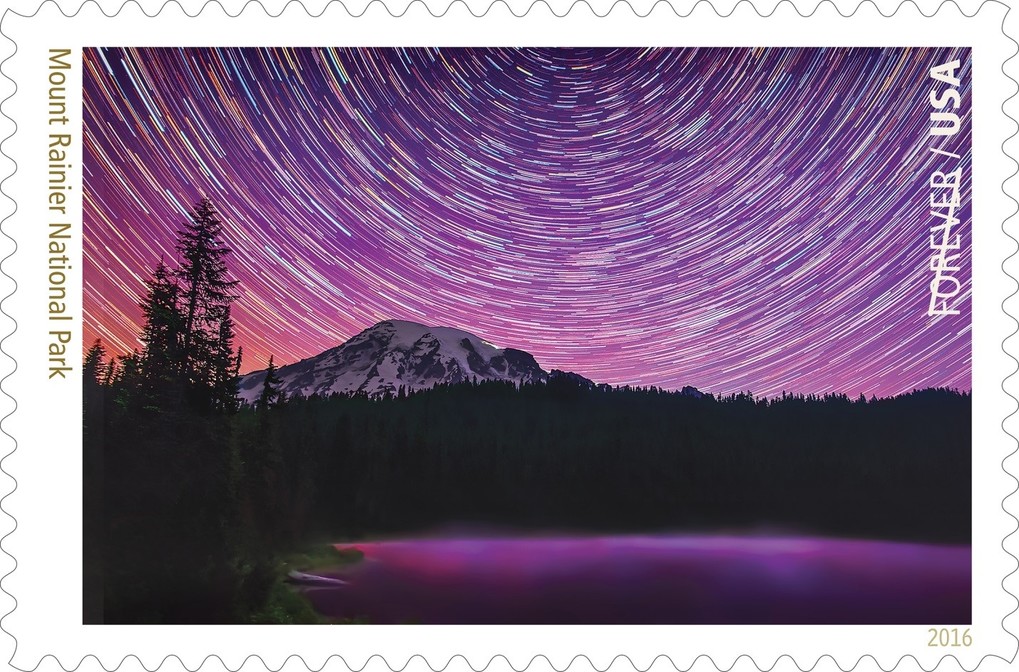 Creating the Star Trail Photo
The stamp image is the creation of Matt Dieterich of Pittsburgh, PA. “This night was one I will never forget,” said Dieterich, who worked at Mount Rainier as an intern with the National Park Service Geoscientist-in-the-Parks to educate the public on dramatic views of the stars and the effect of light pollution near highly populated areas. “After working with visitors at the Mount Rainier astronomy program on June 22, 2015, I noticed there was an aurora, so I drove down to Reflection Lake to capture it.”

“The location was perfect as it contained a view of Mount Rainier and water for reflections,” he continued. “To create this star trails image I took 200 photos in a two-hour window between 2 a.m. and 4 a.m. with my Nikon D750 and 24mm lens set at F/1.4 and ISO 5000. Since the Earth is rotating, each 8-sec. exposure shows stars at slightly different locations. When the photos are combined into one image the stars create a circular pattern around the North Star, which is just out of view at the top of the image. The pink aurora spread throughout the background sky. Mountaineers can be seen with their white headlamps climbing Mount Rainier on the right side of the volcano.”

“To capture star trails photos just like this,” he added, “all you need is a digital single lens reflex camera, a wide angle lens, tripod and shutter release cable. So what are you waiting for? Grab your gear and get out under the stars!”