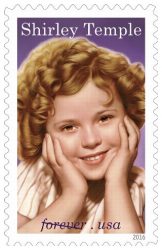 “The Postal Service is proud to honor Shirley Temple, an American treasure and Hollywood legend,” said Postmaster General and Chief Executive Officer Megan J. Brennan, who dedicated the stamp. “This stamp serves as a lasting tribute to her legacy as a world renowned actress and for her distinguished career in public service and international affairs.”

“We are so pleased at this U.S. Postal Service tribute to her extraordinary legacy and her almost magical life story, born of a genuine and optimistic personality, a strong work ethic, and a heartfelt concern for the public good,” said Charles Black, Jr., on behalf of Shirley Temple Black’s family.

The stamp art is a painting by artist Tim O’Brien; it is based on a 1935 image from “Curly Top,” one of the child star’s iconic movie roles. The stamp has the words “Shirley Temple” along the top, with “Forever” and “USA” on the bottom. The selvage features a publicity photo from the 1933 short film “Managed Money.” The Shirley Temple artwork is based on photos from  Twentieth Century Fox Film Corp. The pane’s selvage and verso include biographical text about her acting and diplomatic careers. Art director Ethel Kessler designed the stamp and pane.

Customers may purchase the Shirley Temple Forever stamp at usps.com/stamps, atusps.com/shop, by calling 800-STAMP24 (800-782-6724) and at Post Offices nationwide. A variety of stamps and collectibles also is available at ebay.com/stamps.

Shirley Temple was born on April 23, 1928, in Santa Monica, CA. She began dance lessons when she was just three years old, and that early start paid off when she was cast in “BabyBurlesks,” a series of one-reel film shorts that parodied actual movies, with small children cast in the roles usually played by adults. At age 5, she signed a contract with Fox Film Corp. Her brief appearance in the feature film “Stand Up andCheer,” released in 1934, started her on the road to stardom. Singing “Baby Take a Bow,” the diminutive actress stole the show.

Seven more full-length movies followed in 1934, among them “Little Miss Marker,”which featured her first starring role, and “Bright Eyes,” which included what became one of her signature songs, “On the Good Ship Lollipop.” That same year, a toy company produced and sold the Shirley Temple doll, which remains one of the most collectible dolls ever made. Coloring books, paper dolls, dresses, and recordings of songs from her movie roles were just a few of the other products inspired by America’s favorite star.

Shirley Temple tap-danced with some of the film greats, including Buddy Ebsen and Jack Haley, but her most famous — and possibly favorite — dance partner was Bill “Bojangles” Robinson, with whom she starred in four movies. She called him “Uncle Billy,” and he called her “Darlin’,” and they remained friends for the rest of his life.

Mired in the economic tribulations of the Great Depression, moviegoers found joy and escape from everyday cares in the child star’s bright smile, deep dimples, and irrepressible spirit. Her hairstyle, made up of 56 perfect corkscrew curls, was the envy of little girls everywhere. However, her adorable looks were not her only asset; Shirley Temple was also a talented performer. She took the roles written for her — usually involving a motherless or orphaned child who melts the hearts and fixes the problems of the adults around her — and raised them to a level beyond cliché.

Simply put, Shirley Temple was the biggest star in Hollywood in the mid- to late 1930s. She was photographed wherever she went, her every move followed by adoring fans and reporters. The studio received more fan mail addressed to her than to adult stars like Greta Garbo. She was America’s bright light during the Depression, offering cheer and hope with each smile. President Franklin D. Roosevelt himself praised her for helping to lift the spirits of a nation facing one of its greatest challenges.

The Academy of Motion Picture Arts and Sciences recognized Shirley Temple’s contribution not only to Hollywood but also to the culture in general. She was awarded the first-ever juvenile Oscar at the 1935 Academy Awards ceremony in recognition of her outstanding contribution to screen entertainment during the previous year. She went on to be the number one box-office draw for four years in a row.

Girls grow up, even movie stars, and by age 12, Shirley Temple’s film career had reached its peak. Fans who had worshipped the adorable little girl did not embrace the adolescent actress. Her parents decided that she should go to school rather than be tutored at the studio, and she made movies during her summer vacations. Although she was still cast in good roles, such as her part in “Since You Went Away” (1944), performances did not capture a new audience. She retired from movies at age 21.

In 1950, Shirley Temple married Charles Black and, thus, she became known as Shirley Temple Black. They enjoyed a happy, everyday family life along with their two children, Charles and Lori, and Shirley’s daughter Linda Susan from her earlier marriage to John Agar. Black also spent a brief but memorable time working in television, starring in two series for children that involved the retelling of fairy tales and other stories. Along with Black, some of Hollywood’s biggest stars played roles in these television shows.

During her years in Hollywood, Black had involved herself in public service, and that commitment never wavered. During the 1960s, she served as president of the National Multiple Sclerosis Society, raising funds and awareness. This was a very personal cause for her because her brother George suffered from the debilitating disease. In 1961, she co-founded the International Federation of Multiple Sclerosis Societies. It was also during the 1960s that she became active in politics.

President Richard Nixon appointed her a delegate to the United Nations in 1969, the beginning of her distinguished career in diplomacy.

In 1972, Black, who had already proven her resilience, once more pioneered the way for other women when she became one of the first public figures to candidly acknowledge her breast cancer and mastectomy. Her courage in talking publicly — she held a news conference from her hospital bed — is widely credited with helping to make the discussion about breast cancer, alternatives to radical mastectomies, and a woman’s right to be part of the decision regarding her treatment acceptable in the public forum. In response, she received more than 50,000 cards and letters of appreciation and admiration.

Black was appointed U.S. ambassador to Ghana in 1974. She had experience working on African issues from her days as a U.S. delegate to the United Nations, but this was her first ambassadorial assignment, and career diplomats were skeptical. The Ghanaians accepted her wholeheartedly, and as Black proudly told President Gerald Ford later, she was made an honorary tribal chief.

President Ford appointed Black the U.S. Chief of Protocol in 1976. The protocol office plans the visits of foreign dignitaries to the United States; manages Blair House, the presidential guesthouse; and oversees all the ceremonial and official functions of the president, among numerous other duties. The first woman to hold the office, Black was an ideal choice, combining her experience in diplomacy with her natural charisma, charm, and organizational skills. Among her tasks was planning key elements of the inaugural celebrations for President-elect Jimmy Carter, Ford’s successor. Her mother was ill at the time, but Black carried out her duties perfectly. After her mother passed away, Black resigned and returned to private life.

Between diplomatic posts, Black wrote her autobiography, “Child Star,” and in 1983 she became a charter member of the newly formed American Academy of Diplomacy. A few years later, she was appointed Honorary Foreign Service Officer of the United States, the first person to be awarded this honor.

President George H. W. Bush appointed Black U.S. ambassador to Czechoslovakia in 1989. Twenty-one years prior to her arrival in Prague as ambassador, Black had visited the city to organize Czechoslovakia’s entry into the International Federation of Multiple Sclerosis Societies. During her stay, Warsaw Pact forces invaded the country to crush reform efforts, and she witnessed firsthand the violence that accompanied the invasion. It was fitting, then, that during her tenure as ambassador, the country overthrew its Communist government and began its peaceful division into two countries, the Czech Republic and Slovakia, which became official after she had returned to the United States.

Black’s career as a diplomat was eventful, but her earlier career as a movie star was not forgotten. In 1998, she was a Kennedy Center Honors recipient, and a year later the American Film Institute included her as one of the 50 greatest screen legends. The Screen Actors Guild presented her with their Life Achievement Award in 2006.

Shirley Temple Black died on Feb. 10, 2014. She had been a diplomat longer than she had been an actress, and her contributions were great in both of those careers. She brought joy to moviegoers at a dark time in American history and earned the respect and admiration of the American people for her role in diplomacy.

Ordering First-Day-of-Issue Postmarks
Customers have 60 days to obtain first-day-of-issue postmarks by mail. They may purchase new stamps at local Post Offices, at the Postal Store usps.com/shop or by calling
800-STAMP-24. They should affix the stamps to envelopes of their choice, address the envelopes to themselves or others and place them in envelopes addressed to:

After applying the first-day-of-issue postmark, the Postal Service will return the envelopes through the mail. There is no charge for postmarks up to a quantity of 50. For more than 50, customers are charged 5 cents each. All orders must be postmarked by June 18, 2016.