A postal worker in Thunder Bay ended up in hospital on Wednesday after a community mailbox toppled over onto her as she was delivering the mail.

“It fell right on top of her, breaking her glasses, hitting her head and her right shoulder was injured,” said Joanne Nowosad, president of the Thunder Bay local of the Canadian Union of Postal Workers, in a statement issued on Thursday. 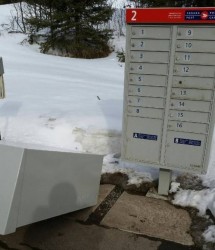 “These mailboxes are a clear and present danger to public safety… what if it had fallen on top of a child?”

The worker’s injuries were not believed to have been life-threatening. Photographs taken by union representatives show the box somehow became detached from its concrete base, causing it to fall forward onto the ground.

Read more: ‘What if it had fallen on top of a child?’ Postal worker hurt by falling mailbox – National | Globalnews.ca