FedSmith.com had an interesting story earlier this week which purported to show that the highest average salaries in the US Postal Service are concentrated in some of the smallest towns in the country. There are some interesting numbers, but the article has some serious flaws. It starts off with a reasonable question:

Who makes the most money working for the US Postal Service (USPS), and where do they work?

But the author immediately gets into trouble with the followup:

For example, which geographic locations have the highest average salaries? Washington, DC? New York City? San Francisco? Those would be logical guesses based on the higher cost of living in cities such as these.

They might be logical guesses if postal employees received locality pay- but with a few minor exceptions, they don’t. 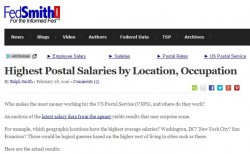 The author next presents a table showing what he says are the highest “average” USPS salaries by location. Number one is Borden, Indiana with an “average” salary of $106,857! Number three is Potomac Maryland, with an average of $104,686.

Most postal workers have heard of Potomac, so let’s start there. The author apparently didn’t dig down into the data very far- if he had, he’d have noticed that FedSmith’s database lists exactly two “postal workers” in the town. And neither of them are postmasters, clerks or letter carriers. One’s title is given as “MGR WFB CRT FOR LEA”, the other as “SUPPORT SRVCS SPEC”. You’ve probably figured out that the second title is short for “Support Services Specialist”. The other? It stands for “Manager, William F. Bolger Center for Leadership Development”. The Bolger Center is the USPS management training facility. It’s not a post office- it’s a training center located in a facilty that doubles as a hotel. Outside of those two managers, it’s mainly staffed by a hospitality industry contractor.

But what about that number one facility- the Borden Indiana post office? The author guesses that “No doubt, seniority plays a role in the higher salary levels in these locations.” No, not really. In this case, digging down into the data reveals that Borden has exactly one “salaried” employee, the Postmaster. So the “average” salary in Borden is the Postmaster’s, period. But why would the Postmaster in a town with a population of 845(!) make that much money? One clue is the postmaster’s “level” as shown in the database: 23. That’s the level of a good sized city Postmaster, or a senior manager in a district office, not a small town PM. And if you look a bit deeper, you’ll find that up until 2014, the current Borden Postmaster was a Manager of Post Office Operations for the Kentuckiana District in Louisville, 22 miles down the road from Borden. A safe guess would be that her POOM position was eliminated, and she opted to take a lower level position at saved salary. So- nothing to do with “seniority”, or with the relative poverty or affluence of Borden IN itself.

Next, lets take a look at Landover MD, the number two highest paid “town” on the list. Why do Landover “postal workers” average almost $107K a year? Easy- they’re lawyers. (Or paralegals, legal secretaries, etc…) The FedSmith author apparently didn’t look closely enough to see that what he calls “Landover MD” is actually the offices of the USPS Capital Metro Area legal staff!

Lastly, the author doesn’t seem to have a clear understanding of what the USPS considers a “salaried” employee. It basically means a full time regular employee, regardless of whether the employee is management or craft. So a full time letter carrier, clerk or mail handler will appear in the database with an annual salary, even though he or she is actually paid on an hourly basis. The “salary” in the database doesn’t include overtime or other “premium” pay, and it’s not adjusted for leave without pay. Part time and other employees will be shown with an hourly rate. Since those non-fulltime employees don’t have an annual salary listed in the database, you can’t use it to accurately calculate an “average” salary.

The FedSmith database can be a handy, if limited, tool, but if you’re going to analyze it, you need know what you’re looking at and get your facts straight!