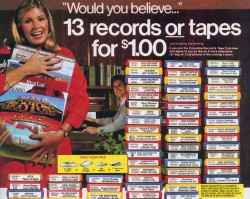 Twenty years ago, before there was such a thing as an iPod, there was Columbia House- the mail order behemoth that offered 8 CDs for a penny- if you signed up for their service. Millions of people did sign up, and at one point the company sold 15% of all CDs purchased in the US.

The owner of onetime mail-order music giant Columbia House filed for chapter 11 bankruptcy protection Monday, seeking to sell what remains of its business after almost two decades of declining revenue.

Filmed Entertainment Inc. filed for chapter 11 at the U.S. Bankruptcy Court in Manhattan, citing the advent of digital music and dramatic changes in technology that are threatening to render CDs and DVDs obsolete.

Since peaking in 1996 at about $1.4 billion, revenue has declined almost every year since, according to FEI director Glenn Langberg. Last year, net revenue was just $17 million.

Columbia House got out of the music CD business in 2010, but continued to sell DVDs by mail. That business has been hit hard by streaming services like Netflix, as well as the availability of pirated content on the internet.