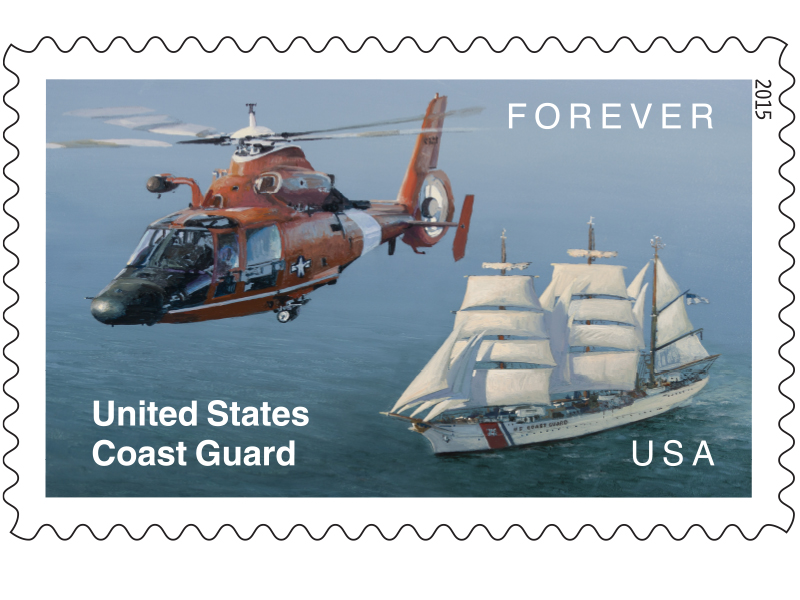 WASHINGTON — The U.S. Postal Service commemorated the U.S. Coast Guard on its 225th anniversary today by dedicating a Forever Stamp to honor its role in protecting the security of the nation and advancing vital maritime interests.

Aviation artist William Phillips of Ashland, OR, painted the image using oil and Masonite. Phil Jordan of Falls Church, VA, is the art director. The back of the stamp sheet provides background on the Coast Guard.

The stamp dedication ceremony took place at the Coast Guard’s Douglas A. Munro Headquarters building in Washington, D.C. The building is named after a World War II Medal of Honor recipient who received the honor posthumously following the battle of Guadalcanal.

“The Coast Guard is truly a symbol of safety to all Americans. Those who live in a coastal community, or spend time on our waterways and shores, know that the Coast Guard does whatever it takes to ensure that they are safe and protected,” said Postmaster General Megan Brennan.

“Stamps tell America’s story and it is a great honor for the Coast Guard to be memorialized on our 225th anniversary in the Forever Stamp collection. For 225 years, the Coast Guard has proven its enduring value to our nation. We warmly welcome this tribute and the opportunity to share our story with the nation we serve,” said Zukunft.

During an average day, Coast Guard personnel assist more than 300 people in distress, save more than $2 million in property, board 90 large vessels for port safety checks, conduct 120 law enforcement boardings, and investigate more than a dozen marine accidents.

U.S. Coast Guard history
The U.S. Coast Guard traces its history to a law enacted in August 1790 by President Washington. The law provided for a fleet of 10 vessels, or “revenue cutters,” to aid in collecting duties on goods imported into the United States. This fleet guarded the Atlantic coast and thwarted smugglers and pirates trying to evade tariffs. It was the genesis of what became the Revenue Cutter Service, forerunner of today’s Coast Guard.

The U.S. Coast Guard received its current name in 1915, under President Wilson. The Revenue Cutter Service and the Life-Saving Service, which had been established as a separate agency in 1878, were combined into one organization. The 1915 legislation also made explicit that the Coast Guard was “a part of the military forces of the United States” and would “operate as a part of the Navy . . . in time of war or when the President shall so direct.”

Nation’s lifeguard
The search-and-rescue mission of the Coast Guard is perhaps the mission most familiar to the public today. The helicopter became a valuable aid in the cause soon after its introduction in the 1940s. In 1955, Coast Guard helicopters rescued scores of Connecticut residents from floodwaters caused by two late-summer hurricanes, and on Christmas Eve of that year a single helicopter rescued 138 victims of a massive flood in northern California. Not long after these dramatic incidents, helicopters joined cutters as icons of the Coast Guard.

Hurricane Katrina
One of the largest response-and-rescue efforts in the history of the Coast Guard took place in 2005 after Hurricane Katrina slammed the Gulf Coast. As the city of New Orleans was deluged by 20-foot high floodwaters, tens of thousands of residents were left clinging to rooftops or huddling in attics. Some 5,000 personnel rushed to the scene, and a large percentage of the Coast Guard helicopter fleet deployed.

The effort was complicated by the challenges of urban search and rescue, including downed wires that posed a hazard to helicopter rotor blades. Some rescue swimmers had to borrow fire axes to cut through rooftops to reach people trapped in their attics. At one point, Coast Guard personnel were rescuing 750 people an hour by boat and 100 people an hour by air. The final tally of persons rescued and evacuated from rooftops, flooded homes, and stricken hospitals exceeded 33,000.

The Coast Guard’s incredible response to Katrina was a testament to its culture of service and exemplified its longtime motto, “Semper Paratus — Always Ready.”

Text on the back of the stamp sheet (Verso Text)

The United States Coast Guard is a multi-mission military service that has helped ensure the safety and prosperity of the nation for 225 years.

The Coast Guard traces its history to 1790, when rampant maritime smuggling was starving the fledgling nation of desperately needed tariff revenue. At the urging of Alexander Hamilton, considered to be the Coast Guard’s founder, President George Washington approved the construction of a fleet of ten boats, or revenue cutters, to serve as an armed customs enforcement service. These cutters and their brave crews were the earliest forerunners of today’s Coast Guard.

Today, on America’s waterways and oceans, the Coast Guard is the nation’s first responder. In addition to saving lives at sea, the Coast Guard enforces maritime law, maintains shipping lanes, breaks ice, protects the marine environment, responds to oil spills and water pollution, ensures port security, and combats terrorism. In times of emergency, the Coast Guard is ready for action, working with maritime, law enforcement, and military partners. The Coast Guard has served alongside the other armed forces in nearly every armed conflict in the nation’s history.

The Coast Guard’s active duty men and women serve proudly along with reservists, volunteer Coast Guard Auxiliarists, and civilian professionals. From across the nation and every walk of life, through basic training at Cape May, New Jersey, or the Coast Guard Academy in New London, Connecticut, service members share a commitment to excellence and service above self, embodying the Coast Guard’s core values of honor, respect, and devotion to duty.

At the nation’s founding, Alexander Hamilton wrote that “a few armed vessels, judiciously stationed at the entrances of our ports, might at a small expense be made useful sentinels of the laws.” While missions have expanded and evolved, the Coast Guard remains Semper Paratus — Always Ready.

After applying the first-day-of-issue postmark, the Postal Service will return the envelopes through the mail. There is no charge for postmarks up to a quantity of 50. There is a 5-cent charge for each additional postmark over 50. All orders must be postmarked by Oct. 3, 2015.

Ordering first-day covers
The Postal Service also offers first-day covers for new stamp issues and Postal Service stationery items postmarked with the official first-day-of-issue postmark. Each item has an individual catalog number and is offered in the quarterly USA Philatelic catalog, online atusps.com/shop, or by calling 800-782-6724. Customers may request a free catalog by calling 800-782-6724 or writing to: 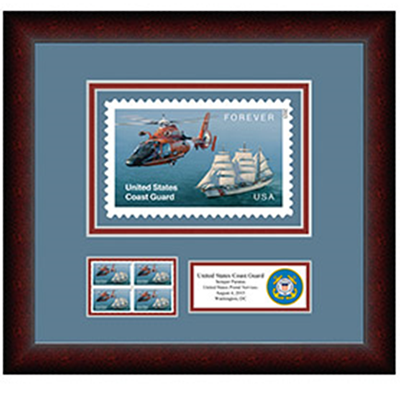 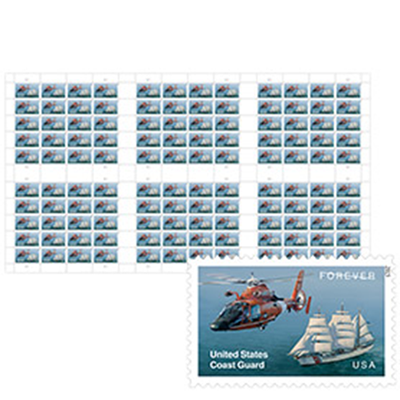 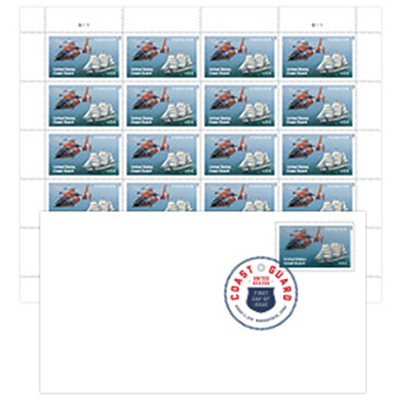 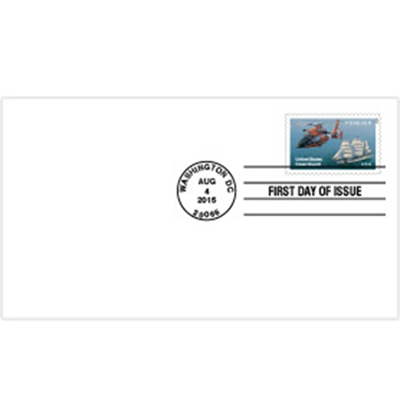 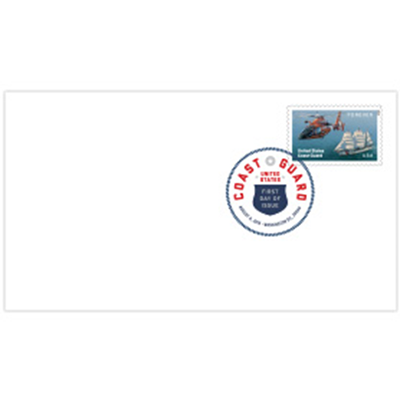 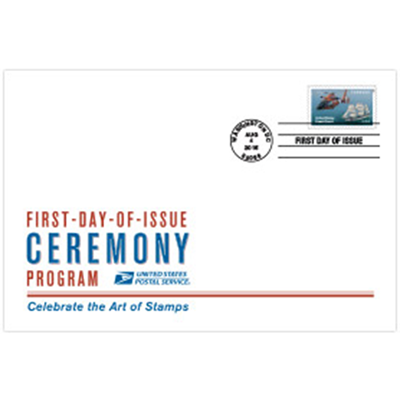