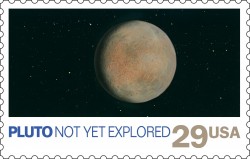 On 15 July 2015, New Horizons, a spacecraft built by the Applied Physics Laboratory (APL) at John Hopkins University, flew past Pluto. As the New Horizons science team erupted in proud cheers, there were two other scientists who were probably feeling just as proud.

In 1991, the US Postal Service (USPS) released a set of stamps, one each for every planet of our solar system. But, there was one hitch. Since Pluto was yet unexplored, no one knew how the dwarf planet (then a planet) looked like. The result was a greenish-blue circle that was labelled Pluto and the words “Not Yet Explored”.

You might find it unbelievable that this seemingly trivial phrase led to one of the greatest cosmic journeys of our times. But, here’s Robert on how the stamp affected scientists. In a journal article called To Pluto by the way of a postage stamp, he writes, “Taunted by words on a postage stamp, a group of mission designers at the Jet Propulsion Laboratory is struggling to find a cheap way to go to Pluto.”

Source: Podcast: How A Postage Stamp Inspired The Journey To Pluto | Audiomatic