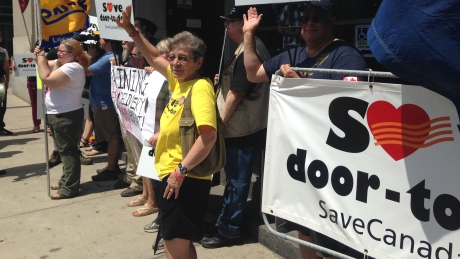 A couple of dozen people showed up from Hamilton and elsewhere, waving flags and “Save door-to-door” signs outside the John Sopinka Courthouse in downtown Hamilton Tuesday.

They were there to lend their support to the city’s fight against Canada Post’s plans to install community mailboxes and phase out door-to-door mail delivery. It’s a case being watched around the country for its implications on other municipalities unhappy about the Crown corporation’s planned changes to mail delivery.

But upstairs, the afternoon court hearing — which will resume Wednesday at 9 a.m. — opened with a warning from from the judge:

“This is not a political exercise,” said Justice Alan Whitten.

“This is not an exercise [for the city] to impose their political will about whether there is door-to-door delivery.”

He said the case is focused on a much narrower slice of jurisdiction: Who has the right to control where mailboxes for carrying out federally mandated postal delivery should go?

Read more: Canada Post vs. Hamilton: A look at round one in court fight over mail – Latest Hamilton news – CBC Hamilton