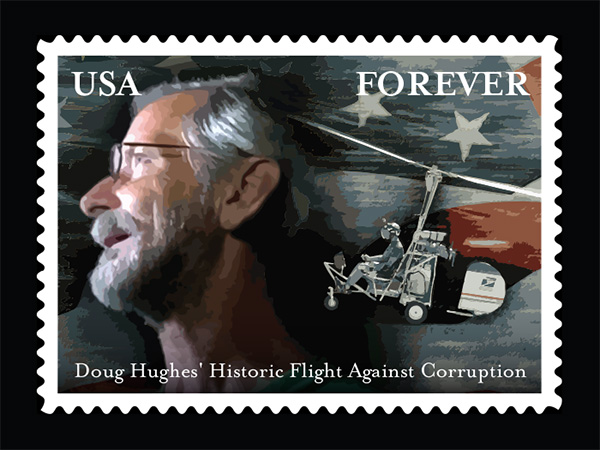 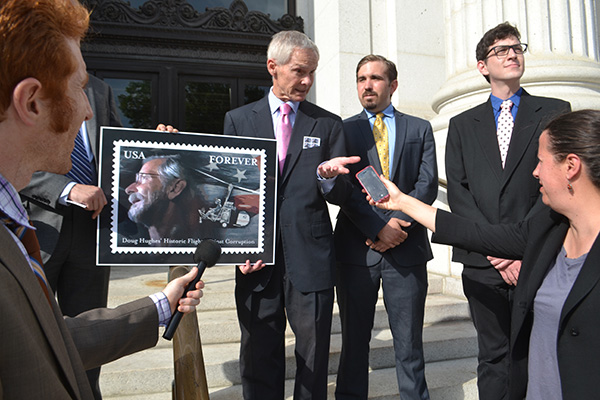 The commemorative stamp was unveiled this morning at the National Postal Museum in Washington, DC, by Deputy Postmaster Kirk Reiland. The stamp features a portrait of Hughes, as well as a rendering of his one-man gyrocopter, a small anachronistic helicopter favored by hobbyists, with the accompanying text: “Doug Hughes’ Historic Flight Against Corruption.” The stamp design was donated by retired Maryland postal worker and painter, Thomas P. Conrad, a fellow gyrocopter enthusiast.

The event was attended by press, as well as family members of the honoree. Mr. Hughes himself was unable to attend due to his house arrest in Ruskin, Florida, pending arraignment in Federal court on May 21.

At the time of his flight (and subsequent arrest), the national news media focused obsessively on the details of the security breach supposedly posed by Hughes’ unusual flight, with little focus on the “democracy breach” it was meant to call attention to, a breach in abundant evidence in Washington.

That’s what happened in a perfect world today, according to a cleverly put together parody of Darrell Issa’s old web site.

In reality, Hughes returned to Washington today to face charges resulting from his protest. Hughes is next scheduled to appear in court on May 27 for a “status hearing”, assuming the judge isn’t too busy- today’s court session was delayed because his honor was attending a “luncheon.”