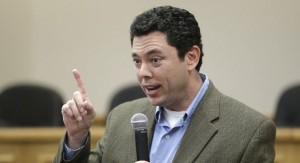 Jason Chaffetz, chairman of the House Oversight Committee, apparently thinks the US Postal Service might be using money saved from service cutbacks in its “market dominant” products (e.g. first class mail) to finance expansion of its package delivery business and other “competitive” services. Under the 2006 PAEA law, competitive products have to pay their own way, and the USPS is required to pay the equivalent of corporate income tax on competitive revenues. Those “tax” payments are then supposed to help support the postal service’s market dominant, “universal service” products.

Chaffetz suggests the USPS might be doing just the opposite. In a letter to Postmaster General Megan Brennan, Chaffetz points out that the USPS has said as much in its own public staements, pointing to a faq published on the Network Rationalization site that says cost savings from plant consolidations and other cutbacks “should better position the Postal Service to make the needed investment in package processing and other automation equipment, and in our delivery fleet, which will help us to grow our package business”

So the Committee is asking the USPS to provide documentation on just how it separates costs and revenues from the different services. The documents are due May 26, and a committee hearing will no doubt follow soon thereafter.

Here’s the text of the Chaffetz letter:

While the Postal Services recent package related revenue growth has provided a much needed financial bright spot, the Postal Service must abide by the necessarily complicated legal framework to ensure compliance with the statutory prohibition on cross-subsidization of competitive products by market dominant products and revenue.

The growth in competitive products revenue makes the PAEAs related provisions far more important than expected at the time of enactment. Opportunities for unlawful cross subsidization exist in a number of areas. In fact, some of the Postal Services actions and public statements have heightened the Committees concerns about cross-subsidization. For example, a Frequently Asked Questions” document the Postal Service produced regarding its Phase 2 Network Rationalization plan stated:

Cost savings realized through this and other initiatives should better position the Postal Service to make the needed investment in package processing and other automation equipment, and in our delivery fleet, which will help us to grow our package business.

Given that Postal Service package delivery” products are almost solely competitive in nature, it is important to ensure the bright line separation between market-dominant and competitive products is maintained.

The Committee on Oversight and Government Reform is the principal investigative oversight committee of the US. House of Representatives and may at any time” investigate any matter” as set forth in House Rule X.