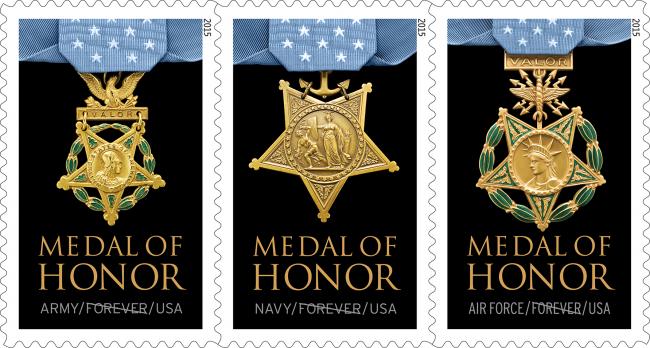 WASHINGTON, March 6, 2015 – This Sunday, March 8, marks the 50th anniversary of the beginning of the ground war in Vietnam with the deployment of 3,500 Marines. By war’s end on April 30, 1975, nearly 3 million service men and women had fought in the conflict that would take the lives of more than 58,000 Americans.

Of those who served during the Vietnam War, 258 were awarded the Medal of Honor. More than six out of 10 award recipients made the ultimate sacrifice, giving their lives while performing the courageous acts for which they were later honored. American military advisers had been involved in South Vietnam since the 1950s.

The U.S. Postal Service will honor these brave Americans by dedicating the Limited Edition Vietnam War Medal of Honor Prestige Folio Forever stamps on Memorial Day, May 25. The 1 p.m. ceremony, hosted by the Vietnam Veterans Memorial Fund and the National Park Service, will take place at the Vietnam Veterans Memorial on the National Mall in Washington, D.C. The event is free and open to the public.

The Medal of Honor is America’s most prestigious military decoration. It is awarded by the president of the United States on behalf of Congress to members of the armed services who distinguish themselves through “conspicuous gallantry and intrepidity at the risk of life above and beyond the call of duty” while engaged in action against an enemy of the United States.

The Medal of Honor traces its origins to the first year of the Civil War, when Congress saw the need for a formal means of recognizing or rewarding acts of heroism. In 1861, James W. Grimes, a senator from Iowa, introduced a bill to “promote the efficiency of the Navy” by distributing “medals of honor.” President Abraham Lincoln signed the bill into law on Dec. 21, 1861. Lincoln signed a similar measure on behalf of the U.S. Army on July 12, 1862, and the country had two Medals of Honor: one for sailors and one for soldiers.

There are now three similar, yet distinct, versions of the Medal of Honor, one for each military department — Army, Navy, and Air Force. The medals are similar in that each consists of a variation of a five-pointed star worn around the neck on a light blue ribbon. The Navy version is awarded to those serving in the Navy and Marine Corps, and during times of war, to members of the Coast Guard. The Air Force, which was established as an independent department in 1947, adopted its distinctive Medal of Honor in 1965. The first presentation of the U.S. Air Force’s medal took place in 1967 during the Vietnam War.