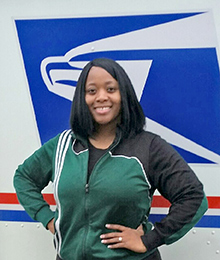 Irmo, SC, Rural Carrier Kendra Miller had finished her route and was on her way back to the Post Office when she saw a vehicle with the driver behind the wheel — her head laid back.

Miller approached and found the doors locked with the engine still running. She knocked several times but the woman was unresponsive, so she called 911.

Emergency personnel responded and pried open the doors. The fire chief recognized the car and knew the owner was diabetic. As paramedics treated the woman, Miller used the woman’s phone to notify her family of the dire situation.

According to the managers in Irmo, “it’s no surprise” that Miller’s quick thinking helped save a life.

Miller later received a letter from PMG Pat Donahoe, which stated, “I want to commend your selfless display of civic duty. We are fortunate to have employees of your caliber represent this organization.