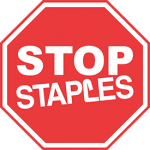 09/24/2014 – The president of the American Federation of Teachers has a message for Staples CEO Ron Sargent: We’re not buying!

AFT President Randi Weingarten wrote to Sargent on Sept. 17, “As you know, teachers are critical to your profits. Last year, educators spent over $1.6 billion of their own money on school supplies and a lion’s share of that money was spent at Staples stores all across the country. Some of our local affiliates have even entered into partnerships with Staples to offer discounts to teachers and other school-related staff with a goal of reducing costs to benefit the communities and families we serve.

“Regrettably, many of these partnerships have and will continue to end as long as your company continues to participate in the privatization of postal retail operations through the ‘Approved Shipper’ program, which replaces living-wage Postal Service jobs with low-wage Staples jobs and compromises the safety and security of the mail.”

The AFT voted to endorse the ‘Don’t Buy Staples’ campaign at their national convention in mid-July. The National Education Association, with 3 million members, has also asked their members to buy school and office supplies elsewhere.

Union Privilege, which provides union members and their families with valuable consumer benefits, announced in August that it would stop ordering supplies from Staples. “We believe that all Americans have a right to postal services that are provided by uniformed USPS employees who have sworn an oath to safeguard our mail and who are accountable to the American people…. We will also use our email and social media channels, which reach some 1 million union members from more than 50 unions, to spread the word that the U.S. Mail should not be for sale.”

Also in August, the Massachusetts AFL-CIO unanimously endorsed the Staples boycott. “It is important that we stand up to companies and government entities that attempt to replace good union jobs with low wage labor,” said President Steven Tolman.