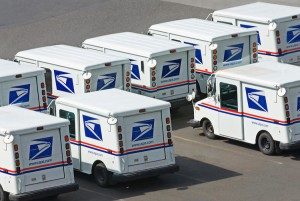 USPS management thinks that its existing LLV’s are just fine for delivering mail on many of its routes- they just need new chassis:

The LLV represents the largest segment of the USPS deiivery fleet with an approximate current quantity of 142,000 units. The LLV was produced by Grumman Oison from 198? to 1994. It has an aluminum body mounted on a General Motors modified 8-10 chassis.

The United States Postal Service (USPS) would like to retain the best quaiities of the current right hand drive Long Life Vehicle (LLV) without having to redevelop what has been proven to work. The objective is to provide a new rolling chassis that will seamlessly mate with the existing body while capturing advances in vehicle technologies that have been developed in the last 20 years maintaining the existing vehicle payload requirement. The current body of the LLV is to be retained as it contains optimal delivery features such as the roll up rear door, sliding side doors and correct ride height for curbside deliveries. The USPS desires to reduce the LLV existing chassis shortcomings such as the low miles per gallon‘ poor resistance to corrosion in multiple components and outdated engine diagnostics. The current chassis encompasses inefficient technologies and high maintenance items the USPS would like eliminated.

There is a multitude of routes, primarily rural, where the LLV volumetric and payload capacity is more than adequate. The Postal Service has identified up to 40,000 routes where the LLV is still the ideally sized delivery vehicle. This vehicle will operate in tandem with the next generation delivery vehicle as the two primary light delivery vehicles in the postal fleet for the foreseeable future. The rolling chassis solution will need to have a 20 year+ life.