From the Hibbing Minnesota Daily Tribune:

HIBBING — In a slight hurry to get out of the Saturday afternoon rain with the two shih tzus, Elffie and Vinnie, Mark Denbrook was about a half a block from his Hibbing home when he took a nose dive in the Fourth Avenue East alley between 39th and 40th streets.

“To steal the line from the commercial, I had fallen and I couldn’t get up,” said Mark  Denbrook, a retired educator and daily dog walker. “I was really concerned about the dogs. I didn’t want them running out into the street, so I was hoping somebody would come by. I was conscious, but too weak to get up — plain and simple.”

And then the mailman arrived! 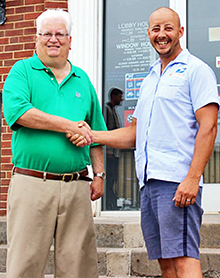 Hibbing, MN, City Carrier Assistant Jason Westby was delivering mail when he spotted a man on his hands and knees and two small dogs nearby. The man, Mark Denbrook, told Westby he was taking his dogs on their daily walk when he fell and was unable to stand.

Westby offered to call 911, but Denbrook declined. Westby and another passerby helped Denbrook stand, and then they watched as he safely walked home.

“There was no way I could have gotten up. My legs were weak at the time,” Denbrook, who suffers from an inner ear disorder that sometimes causes him to lose his balance, told the Hibbing Daily Tribune. “Even the dogs tried to help. They sat there quietly and calmly, with one of them licking my face.”

Hibbing Postmaster Richard Rusich praised Westby, calling him “a hero in the eyes of this Post Office.”  Westby, who had been on the job for just a week, said he was thankful he “was in the right place at the right time.”