An investor writing for Seeking Alpha thinks Stalpes’ days are numbered, and the abrupt cancellation of its deal with the USPS proves it: 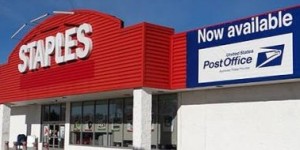 Nothing shows Staples’ vulnerability more than its reliance upon school supplies. The Wall Street Journal reported that Staples has killed a program to open post offices in its stores. The program was killed because the American Postal Workers Union was able to get two teachers’ unions to join it in a boycott of Staples. The postal workers were mad because Staples employees are nonunion.

Staples’ management was afraid that teachers would start telling parents not to shop for school supplies at its stores. With its recent revenue losses, Staples needs all the customers it can get.