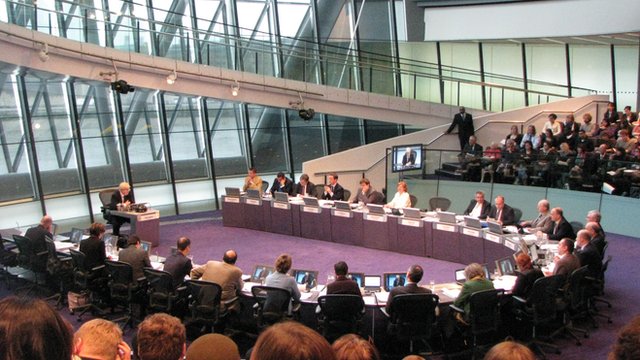 The London Assembly passed a motion today (Wednesday) calling for Boris Johnson, Mayor of London to support the Communication Workers Union (CWU) campaign to protect the universal postal service and lobby the government to bring Royal Mail back into public ownership.

Labour and Green Assembly Members voted for the motion which voices concern over the expansion of the end-to-end postal services by TNT Post across London.

Politicians argued that this expansion will directly impact Royal Mail’s ability to sustain the universal service obligation (USO), which ensures it is the same cost to send a letter anywhere in the UK and that every household receives a postal delivery six days a week.

Billy Hayes, CWU general secretary, said: “I am delighted that the London Assembly carried this motion today. The loss of a universal postal service would impact on cities like London just as much as rural communities.

“TNT plans to cover 42.3 per cent of the total UK addresses but in just 8.5 per cent of the UK. TNT is already operating in many parts of London as well as other cities around the UK. It’s having a significant impact on the amount of mail passing through Royal Mail delivery offices. It’s unfair competition and Ofcom needs to act now.”

Murad Qureshi, Londonwide Labour Assembly Member, who proposed the motion, said: “The disastrous sale of Royal Mail has resulted in a more expensive postal service and a poorer delivery service through no fault of postal workers themselves.

“If Ofcom is not going to deal with the situation in central London with direct deliverers like TNT, then we have no other choice than to bring Royal Mail back into public ownership.”

Jenny Jones, Londonwide Green Assembly Member, who proposed the amendment to the motion, said: “The botched privatisation of Royal Mail has opened the door to poor services from rivals, which could threaten a universal service. A quality service requires dedicated, quality staff and the Royal Mail could be under-cut by companies employing cheap labour to get a cheap service.

“The only way to guarantee Londoners will be able to continue sending and receiving letters throughout the country at a single price is to bring the Royal Mail back into public ownership.”

The London Assembly motion is below:

“This Assembly notes with concern the impact that the expansion of the end-to-end postal services by TNT Post UK across London on has on Royal Mail’s ability to sustain the universal service obligation.

Companies such as TNT are able to cherry-pick the most lucrative areas to deliver post. Furthermore, TNT offers only insecure terms and conditions for staff, employing workers on zero-hours contracts at minimum wage and supporting the growth of a low-pay insecure job market.

This Assembly therefore calls on the Mayor of London to: